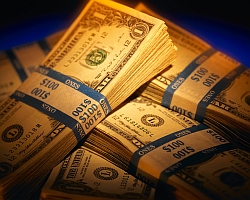 When it comes to high finance, I’m a dunce, so it figures I don’t understand the details of big banking, bailouts, and bonuses, but …

Pres. Obama is saying now, finally, he’s going to get all that bailout money back by levying a fee on those bailed-out banks. He figures if they can afford to pay huge bonuses to their execs, they can afford to pay back the bailout money. I see the logic there, although why you would have loaned anyone a lot of money without stipulating a repayment plan (with interest) is beyond me. Wouldn’t you, you know, just do your average, everyday bank loan sort of deal?

So anyway, the prez is calling his new proposal the “Financial Crisis Responsibility Fee.” And he wants Congress to pass it. And he expects that these banks are just going to ante up the money. Yeah, right.

Not gonna happen. These are the same banks that, when Congress passed credit card reform a while back, rushed to increase fees on all their customers before the new restrictions go into effect next month — to cover their anticipated losses in income, doncha know. (I suppose it never occurred to Congress to make that law effective immediately so the banks wouldn’t have a chance to do that.) Anyway, you can bet these same banks will find a way to get the money out of their customers if Congress levies a “responsibility” fee. I’d bet a bailout it won’t come out of their executive bonues.

According to the email I got today from no less than Vice President Biden himself, “The fee would recover every penny loaned to Wall Street during the financial crisis and stop the reckless abuses and excesses that nearly caused the collapse of our financial system in the first place.”

Yeah, right. Way to keep your eye on the ball, guys.