American kamikazes were airborne on 9/11 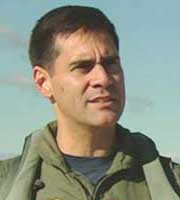 Despite my formerly announced intent to avoid all the 9/11 coverage, with the weekend upon us, it’s becoming difficult. I thought I’d heard all the 9/11 stories, but this one is new this year:

The first two F-16s that were scrambled to stop Flight 93 before it reached Washington were armed only with training ammunition. The pilots, then-Lt. Heather “Lucky” Penney and her commanding officer, Col. Marc Sasseville, took off before their planes could be armed with missiles, having agreed that to stop the hijacked plane, they would ram it. Sasseville would hit the cockpit, taking off the nose, and Penney would take off the tail. They calculated this would stop the plane’s forward progress and cause it to drop straight from the sky, minimizing the debris field on the ground.

As it turned out, the passengers of Flight 93 made the kamikaze attack unnecessary.

Major Penney was part of the first generation of female fighter pilots in the U.S. and was just a rookie on 9/11/2001. MSNBC has the story and includes links to a CSPAN interview and an article in the Washington Post. It appears the Post may have a second article available only to paid subscribers. For this story, I might even consider a subscription.