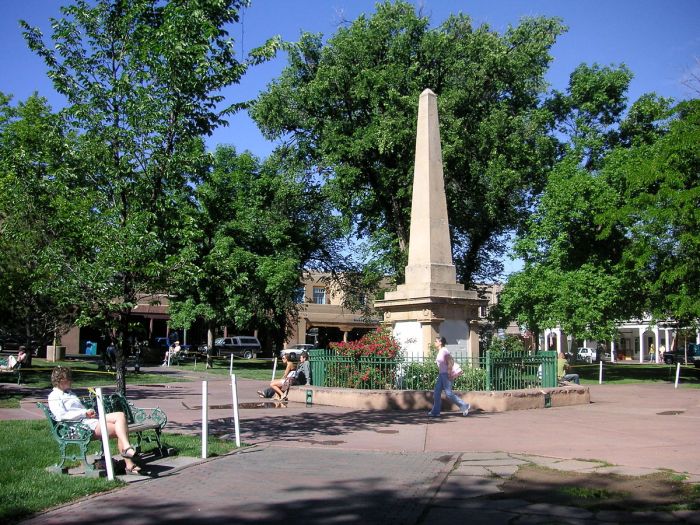 Inscription that used the word “savage,” subsequently chiseled off by a vandal.

The Soldier’s Monument, or Obelisk, in Santa Fe, New Mexico, was dedicated in 1867 to Union troops who died in that state during the Civil War and to New Mexicans who died fighting Indians, represented by two different inscriptions on the monument’s base.

Since then the monument has been the subject of several disputes. In 1909 Southerners demanded that the word “rebels” be changed to “Confederates.” In the 1950s there were calls to remove the monument altogether. And in 1973, members of AIM, the American Indian Movement, declared that the phrase “to those who have fallen in various battles with savage Indians” was racist and should be removed. The City Council first sided with AIM but withdrew when the Santa Fe Historical Society threatened a lawsuit. The following year an unidentified young man jumped the surrounding fence and chiseled off the offensive word “savage.”

Inscription that uses the word “rebels” instead of “Confederates.”

The dispute emerged again in 2000. At the time, with the offending word already gone, a wise Native American, Nathan Youngblood wrote in a letter to the editor: “I have never been attacked by this monument and hold it no malice.” Subsequently, in an effort to both acknowledge and ease the controversy, an additional freestanding plaque was added to the monument:

Monument texts reflect the character of the times in which they are written and the temper of those who wrote them. This monument was dedicated in 1868 near the close of a period of intense strife which pitted northerner against southerner, Indian against white, Indian against Indian. Thus we see on this monument, as in other records, the use of such terms as ‘savage’ and ‘rebel.’ Attitudes change and prejudices hopefully dissolve.

Throughout this year I’ve thought often of the Santa Fe monument and the example it sets for a nation now seemingly determined to erase or somehow change history by removing and/or destroying Civil War statues. Yet those statues, whether you love them or hate them, represent that history and are themselves a part of our history, just like the obelisk in Santa Fe.

I agree that such statues, if they stand on government property with government buildings, should be moved lest it appear that government endorses them. But such statues are part of history; they should be treated with respect and moved to appropriate locations in public parks or other neutral areas. Statues not currently on government property should be left as they are. As in New Mexico, signs can be added that explain the times and circumstances when they were erected. If some people hate them and others love them, so be it. You’ll never be able to please everyone. It’s a compromise, where no one leaves completely satisfied but everybody wins something. The statues are history, every bit as much as the monuments in Washington or the structures listed in the National Register of Historic Places.*

We can’t change history; we can and should learn from it.

The plaque at the Santa Fe Soldier’s Monument.

*Note: The controversial statue of Robert E. Lee in Charlottesville, Va., subject of last weekend’s violence, has been listed on the National Registry of Historic Places since May 16, 1997.

For a detailed account of the events in Santa Fe in 1973, see Slouching Towards Santa Fe: “1973 – On the Santa Fe Plaza”

For more discussion about the Confederate statues, see “More on the statue controversy.”