The U.S. Senate voted today not to extend the Patriot Act beyond the end of the year, when its sunset provisions kick in. The act has been controversial since its […]

Stanley “Tookie” Williams was sentenced to death in 1981 for the murders of four individuals. 1981. That’s twenty-four more years of life, of clemency, than his victims got.

I should have known it was too good to be true. That twinge of optimism I felt after President Bush’s speech yesterday was dashed within an hour. It seems his […]

President George Bush just completed a speech on immigration, and he finally managed to say something convincing and worthwhile. In fact, he said a lot of things convincingly: he’ll stop […] 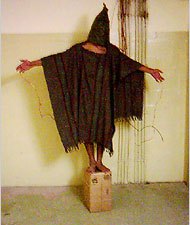 Torture by any name…

PBS’s Frontline documentary “The Torture Question” last night explored at length the U.S. policy on the abuse and torture of prisoners. No amount of euphemism (e.g: “coercive interrogation,” “enemy combatant,” […]

Robertson says take him out

Pat Robertson, the conservative every liberal loves to hate, is at it again. Shovel firmly in hand, he continues to deepen that hole he lives in. This time he is […]

Why I’m voting for Kerry

I’m voting for John Kerry. Why? I’ll try to keep it simple. I have several issues that usually decide elections for me: the environment and women’s rights (pro-choice, not pro-abortion). […]

If the courts decree only a man and a woman may marry, won’t they have to define “man” and “woman”? Hmmm. Chromosome testing… genitalia inspection… pre-sex change or post-sex change…. […]

If they are allowed to stay in the United States, under any condition, isn’t the citizenship of every legal U.S. citizen devalued by that much? By definition, illegal aliens are… […]