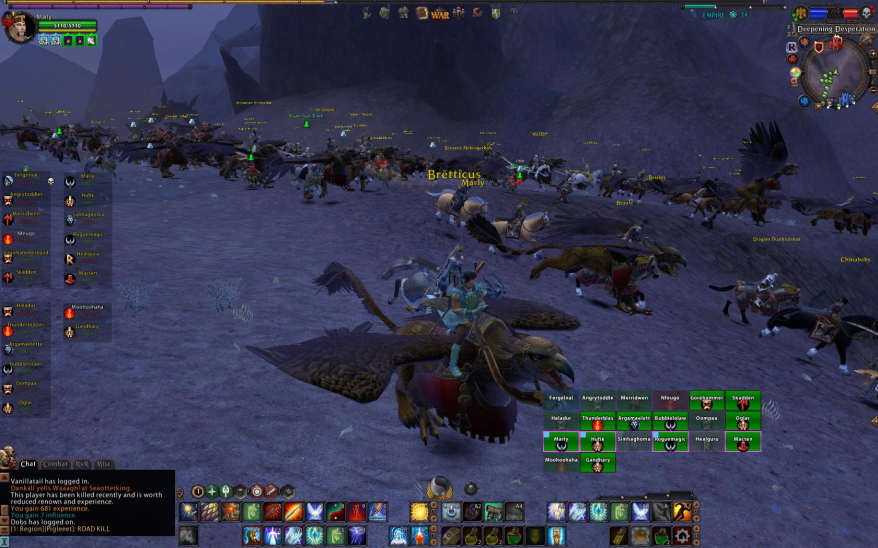 This is what I was doing for grins last night. Playing Warhammer. That’s me, Marly, partially obscured by the griffin in the foreground.

Here the Order “zerg” is rolling north to take  Zimmerman’s Hold away from the enemy, “Destro” (Destruction). Sorry for not thinking to drop the interface.

This screenshot doesn’t begin to do justice to what I could see panning around in-game. There were several hundred players in this zerg, spread as far as I could see ahead of, beside, and behind me. Put this on a big screen, with appropriate stereo sound effects (mostly hoofbeats), talking and listening to several dozen of these players exchanging orders about where to go, etc. This is a totally addictive, immersive, social experience. Not to mention a marvel of modern technology. I’m still amazed that there can be hundreds of players from all over the real world interacting on the same screen at the same time — and that there are computers and systems and coding that can make it all happen.

I know, I know. The explanation either insults your intelligence as a gamer or you have absolutely no idea what I’m talking about. And don’t care. At the very least you’re probably thinking I’m some kind of nut to be playing such games at my age. And that may well be. You know what they say about old age and childhood …

But frankly, I don’t give a damn. This is incredibly fun stuff and I’m not apologizing to anybody. So there.