I wrote recently about Cee Lo Green changing John Lennon’s “Imagine” lyrics. Now it seems there’s another case of lyrics-changing making headlines. Only this time, the original artist has made … END_OF_DOCUMENT_TOKEN_TO_BE_REPLACED

I’m a number of years past my fanatical football fan days. But through attrition, distance, and a general shortening of my attention span, my interest has waned considerably over the … END_OF_DOCUMENT_TOKEN_TO_BE_REPLACED 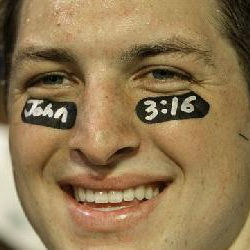 I didn’t know for sure who Tim Tebow was until I heard he and his mom were going to do an anti-abortion ad during this year’s Super Bowl. Such a commotion before we even saw the ad.

But the whole flap did remind me that he’s the overtly Christian player who writes Bible verses on his eye black. Denver ended up drafting him, and this evening I heard news that he, a rookie draftee, is already a no-show holding out for more money. I thought that sounded pretty brazen, staying away from training camp for your first gig as a pro.

My doubts about his fitting in here are stronger than ever now. First because this team has seemed to be little more than a bunch of troublemakers in recent years, with all kinds of questionable and outright criminal behavior going on in their off hours. Not exactly the kind of group where I’d expect a home-schooled, born-again Christian, still tied to mama’s apron strings, to make a strong showing as a leader. And Denver is only the first of a long line of bad actors he’s going to be meeting in the NFL.

I just hope for his sake he’s more mature than he appears to be, because he’s not the only QB on the roster.

Abortion and the Super Bowl. Put that in your pipe and smoke it. Yep, CBS has sold a 30-second Super Bowl spot to the evangelical, anti-abortion, anti-gay activist group Focus … END_OF_DOCUMENT_TOKEN_TO_BE_REPLACED