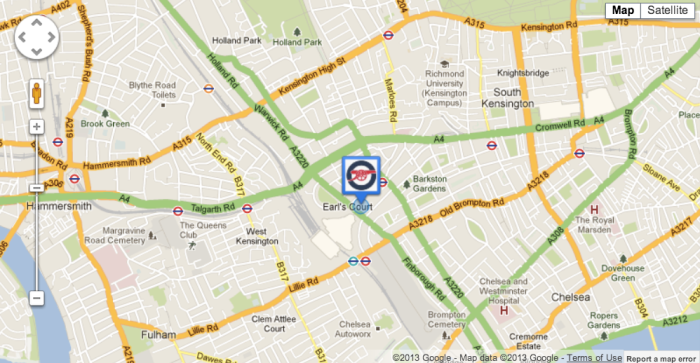 I love technology! I say that all the time. But here’s a particularly outstanding, if personal, example. That cannon icon (Arsenal soccer team logo) is my son’s current location in London, brought to me via Google Latitude. It’s beyond fun to log into the map and see exactly where he is at any time, especially when I can compare this map to one he made before he left, with little pins marking all the spots he hoped to visit while he was there. That’s in addition to the many points of interest already labeled by Google. Silly, perhaps, but this is the sort of thing that intrigues a map-nut mom like me.

The Son had to do some techie things to be able to use his Verizon (CDMA) cell phone in London, and I couldn’t describe them if I tried. But obviously it worked. It’s going to be fun watching his movements over the next 10 days while he, his dad (my ex), and my grandson are there, primarily to see an Arsenal soccer match at Emirates Stadium, but also to catch one or two other matches in the area, in addition to doing as many normal “touristy” things as they can squeeze in.

I’ve been promised a fancy “slide show” presentation, complete with music, when they get home and I’m really looking forward to it. It’s going to be light years beyond the old slide shows my dad did when I was a kid — Kodachrome slides, properly oriented (not upside down, sideways, or backwards) and inserted in proper sequence into the slots/carriers of a cartridge or carousel, which was then mounted on the projector. Slides were changed with a push button control on a long cord (we kids fought for the privilege), and jams were common. Images were projected on a big screen that dropped down from a compartment in the ceiling (an improvement that came after a few years of projecting onto bedsheets, followed by a few years with an awkward, heavy free-standing screen). Of course, there were movies, too. Lots of movies. 16 mm, not the lesser 8 mm.

My dad would have been tickled to death to see what “slide shows” and “home movies” look like today. Not to mention the giant HD TVs that serve as screens. He’d have loved the technology as much as I do.