I may not agree with what you say … 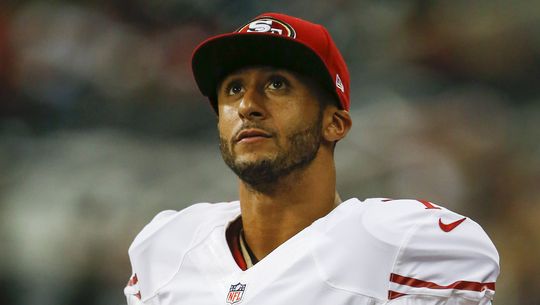 San Francisco 49ers quarterback Colin Kaepernick remained seated Friday night during the playing of the national anthem. He’s done so at other pre-season NFL games, but apparently this was the first time anyone noticed.

After the game Kaepernick said:

“I am not going to stand up to show pride in a flag for a country that oppresses black people and people of color. To me, this is bigger than football and it would be selfish on my part to look the other way. There are bodies in the street and people getting paid leave and getting away with murder.”

What he did seems disrepectful and unpatriotic to many Americans. And that was my initial reaction too, probably because I was taught to always stand and face the flag during the singing/playing of “The Star Spangled Banner.” (And no, I was never taught to put my hand over my heart; that’s reserved for the Pledge of Allegiance.)

But my not caring for Kaepernick’s behavior is irrelevant. This is a free country with free speech guaranteed. If the man wants to remain seated for whatever reason, that’s his right. Nor do I see his action (or inaction) as an antimilitary statement. Free speech and his right to it is one of the things our military defends.

Anyway, that’s my position. To paraphrase: I may not agree with what he did but I’ll defend his right to do it.

Historical note and a surprise to me: “I disapprove of what you say, but I will defend to the death your right to say it” is not a quote from Voltaire. The words were said about him, in a 1906 biography called The Friends of Voltaire, written by Beatrice Evelyn Hall under the pseudonym S. G. Tallentyre.