Home › Media › Storm chasing is not a game

Storm chasing is not a game

Bear with me as I talk tornadoes. Again. I can’t help it. When you live most of your life in central Oklahoma, it’s vital to be interested in tornadoes. And apparently the interest doesn’t lessen when you move away.

By now you’ve heard there were 13 deaths in the Oklahoma City tornado on Friday (the count keeps rising), and three of them were experienced storm chasers. Almost unheard of. Chasers being caught and killed by a tornado.

We know now that the storm hit at the worst possible time — Friday rush hour, when the roads were gridlocked with traffic. We know the storm took several sharp, unexpected turns — abnormal behavior for such a storm. And we know part of the storm track ran right along I-40, where traffic was heaviest and slowest.

Still, what were the odds that experienced storm chasers would be caught?

Take a look at the dots on this map:

Those are storm chasers who were in the area at the time. It’s a wonder more of them weren’t killed. Especially since those aren’t all experienced, professional storm chasers whose jobs are to keep the public informed and safe. Some of them are just looking for dramatic photos and videos they can sell. Others are probably adrenalin junkies. And some might well have been those tour companies that take vanloads of tourists out to see and experience the thrill of real tornadoes up close.

Three of the names this tornado took were Tim Samaras, 55; Samaras’s son Paul, 24; and Carl Young, 45. The two older men and their work were featured on the Discovery Channel series “Storm Chasers.” The three of them were among the most experienced storm chasers in the area that day, known among their colleagues for being particularly cautious. And it didn’t make a bit of difference.

This is the storm track that took everyone by surprise:

What can a tornado do to a storm chaser’s car?

This is what it did to Samaras’s car: 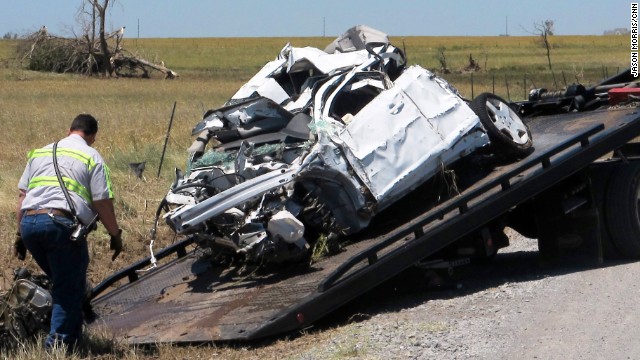 This is what it did to the chase car from The Weather Channel:

It’s time for the amateurs to leave the field. Time for them to stop putting themselves and others in harm’s way just for kicks or a few bucks. Time to reconsider who chases tornadoes and how they go about it.

Just ask Kevin Martin, senior meteorologist at TheWeatherSpace.com. He was a chaser. He quit chasing in 2010 after being caught in “traffic jams from chasers” during a tornado outbreak on May 10. He does not plan to return to the Great Plains.