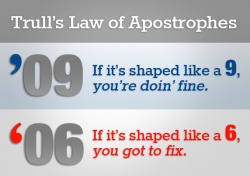 I’d have said, “… you’ve got to fix,” but you get the point. (Image: Donald Trull, signalinc.com)

It’s a term that begs to be used: apostrophe catastrophe. And it has become so cliché that I won’t use it here. There are already dozens of articles and at least one blog titled “Apostrophe Catastrophe.”

Most of the writers describe the misuse of apostrophes and cite signs saying “banana’s” or “bracelet’s ring’s watch’s” or menu headings like “Extra’s.” Those are indeed egregious mistakes, and I’m assuming my readers are educated enough to know that.

But these examples are not the kind of misuse I wanted to correct. I was looking for a solution to the smart quotes (aka curly quotes) dilemma, wherein one’s computer decides on its own that a single open (or opening) quote is a legitimate substitute for a proper apostrophe. It is not. The two curve in opposite directions and the open quote is wrong when an apostrophe is required. (Computers are programmed to insert an open quote whenever a space precedes the character. That may be smart, but it’s not always correct. Programmers are not grammarians, apparently.)

In a May 2013 article in The New Republic, Paul Lukas presents a more detailed discussion of the problem. Another excellent post is “Smart Quotes and Dumb Apostrophes” by Donald Trull. We’re going to lose apostrophes if people don’t start paying attention and typing/printing them correctly.

So this was the latest burr under my saddle: In the last paragraph of my last post, I wanted “… ’em,” the contraction of “them.” My oh-so-smart computer spit out “… ‘em,” which is wrong. An apostrophe is required here, not a single open quote. I was determined to fix the problem, even if it meant inserting a single white open quote in the preceding space in order to force a single black close quote.

Fortunately, I didn’t have to try that. I found that on a Mac, typing option + shift + ]  produces a proper apostrophe at the beginning of a word. At least it looks correct on my Mac screen. I hope that’s what non-Mac users see when reading. There’s no telling how WordPress, different browsers, and different platforms might interpret it. For Windows users, the Alt code appears to be Alt 0146.

Okay, that’s the end of today’s little typography rant. I hope I’ve raised some awareness of the problem and that you’ll take the time to type proper apostrophes when necessary. 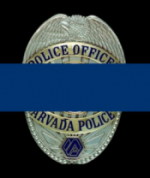