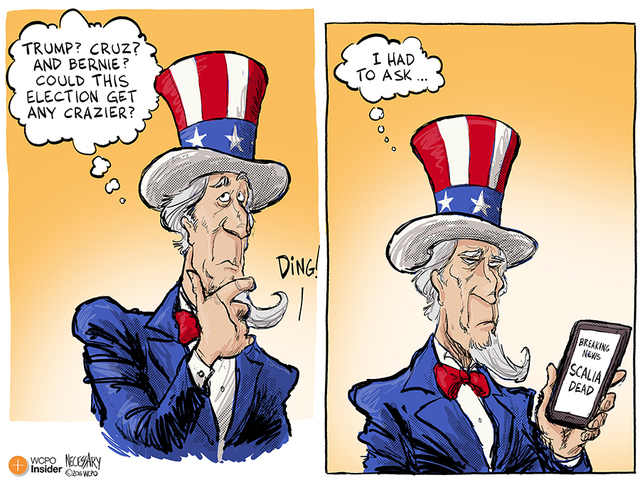 A few days ago I posted a cartoon about voters watching the presidential campaign wars — popcorn in hand — as though they were binge watching “Game of Thrones.”

And then Saturday Supreme Court Justice Antonin Scalia, one of the most conservative justices, died, leaving the court evenly divided with four liberals and four conservatives. As soon as I heard the news I knew it was going to turn the campaign and Washington upside down and inside out. And that’s exactly what’s happened, beginning mere minutes after Scalia’s death was announced. No pausing out of respect for the man or his family. No waiting till after the funeral. No, this was political red meat and everyone, politicians and media alike, pounced like the wolves they are.

Doesn’t matter which side of the political fence you’re on or whether you’re still on the fence. If you’re paying any attention at all you know appointing Supreme Court justices is one of the most important, influential, long-lasting things any president can do and it may well be your litmus test for deciding who gets your vote.

The Dems are arguing that President Obama has the right and constitutional duty (Article II, Section 2) to nominate a replacement and should do so and that the Senate has the right and responsibility to vote yea or nay on that nominee. The Republicans insist that with eleven months remaining in his term, Obama is a lame duck who shouldn’t be allowed to name a replacement. Either way, it has become a major new campaign issue.

And just when I thought this campaign year couldn’t possibly get any more bizarre.