A local newscast just showed an osprey nest in Boulder, Colo., and noted there is a webcam there. I didn’t realize there were ospreys in the area, much less a webcam watching their activities. So I looked up the website.

The camera, maintained by the City of Boulder, is located at Boulder Reservoir, and there are several videos from it on YouTube. But the one that caught my eye was of the male osprey bringing a fish to his mate. I’m no ichthyologist, but I’d bet my last taco that the fish is a koi snatched from someone’s pond. Or maybe a frustrated owner dumped it into a local lake. What do you think? Koi?

(In this video, the fish delivery comes after the egg turning and includes slow motion.)

Several hours later: A bit more poking around on the internet and I found the answer to my question. The Denver Post reported back in 2012 that koi had been found in Thunderbird Lake in a southeast Boulder park. Colorado Parks and Wildlife removed hundreds of the invasive species but obviously didn’t get them all. The problem reappeared in 2015 in Teller Lake, another Boulder lake. So instead of trout or bass, the ospreys dined on koi this time. (One of them, anyway.) But while the city was trying to decide whether to drain the lake or net the fish after stunning them with electroshock, Mother Nature stepped in and, just a few weeks later, pelicans had cleared most of the koi/goldfish. 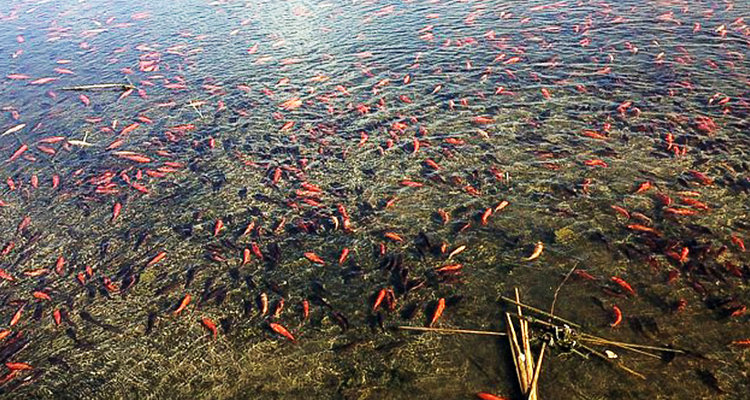 The goldfish-infested waters of Teller Lake in 2015. Photo: Colorado Parks and Wildlife

Okay, so it turned out to be a very old story that garnered lots of attention at the time. Don’t know how I missed it. But once I started writing about it, I kept reading more and writing more and … well … this is the result. Mea culpa.