You might have noticed I haven’t been writing much lately. But I have reasons, or excuses, depending on how you feel about cats.

Mousse, my beloved kitty for 16 years, died in early April. And as you might imagine, I took it pretty hard. Even my dog Annie seemed upset and was off her feed for several weeks. 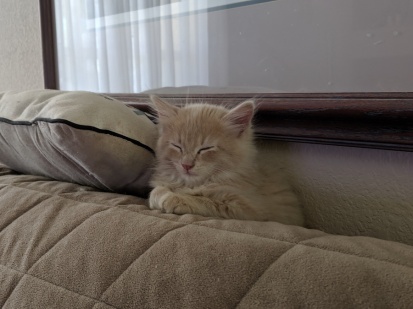 It was about a month before the lack of a cat in the house really began to get to me. I’ve always had at least one cat, and often more. I love Annie and she’s a great dog. But a cat is different, and there was a big void, a silence of sorts, where a cat ought to have been.

So I started watching the websites of the various rescue organizations in the area. They post pictures of their adoptable pets. But I was indecisive about whether someone my age (76) should adopt a kitten or an older cat, what kind I wanted or didn’t want, etc. I finally started making inquiries about some cats, but was always too late to adopt them; someone else had already taken them. It took a while to learn to play the game, which is, quite simply, get there first. And with kittens, first means getting to the shelter the morning of the day they show up online.

Long story short, when two fuzzy littermates showed up one morning on the county shelter site, I was there by 10 am and one of the two, the black one, was already spoken for. But I got the one I wanted.

They move kittens as fast as possible here. In this case, the kitten was just eight weeks old but already neutered, weaned, microchipped, fully tested and vaccinated (as much as his age would allow).

And he certainly keeps me busy. Four-a-day feedings, long naps (in my lap or on my chest), wild playtimes. Fast as a bullet but often completely silent, so I really have to watch my step. I figure it’s good for me. It keeps me moving more than I have been and gives me a big new interest to pursue.

Maybe adopting him was selfish. He will very likely outlive me, but I’ve already arranged with my son to take him if/when that happens (son offered; couldn’t imagine me without a cat). And selfish because Annie will be 11 this summer, and I certainly expect to outlive her. I just couldn’t imagine being left with no pet at all. And if I end up in a home somewhere, a cat would keep me sane.

Anyway, here he is. Took me four days to finally name him Rowdy, but I had dozens of other names just as good. Rowdy is Rowdy Yates, of tv’s “Rawhide,” Clint Eastwood’s big break on television.