These days Americans are angry about laws that don’t work, laws that aren’t enforced, and laws that get blocked or never even passed. But I’m happy to report a particularly ugly case in Colorado where the law worked. 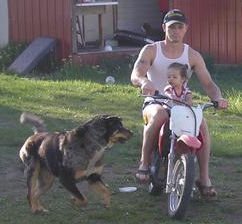 Buddy and his family

On December 30, a dead dog was found in western Colorado. His name was Buddy, and he’d been dragged to death behind a truck. The rope was still around his neck and evidence showed he’d been running in a futile effort to keep up with the moving vehicle.

You may remember the story. Some 260,000 people joined the “Demand Justice for Buddy” Facebook group.

Fortunately for society, good police work resulted in the arrest of the man who killed Buddy, and today Steven Romero, 38, was sentenced to the maximum three years in federal prison.

Or maybe the law doesn’t work so well after all. This was Romero’s 11th felony conviction. Why on earth was he running around loose? What happened to three strikes and you’re out?

I hope he meets many, many animal lovers in prison …