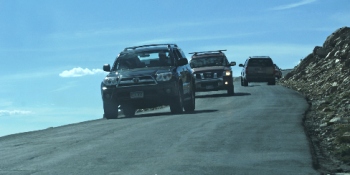 I got a AAA Update in my email this morning that contained something interesting — an article about Colorado’s four scariest roads. Before clicking on the link, I tried to guess what the four might be, and correctly guessed two: Mt Evans and the Oh My God Road. I’d forgotten Pikes Peak, and I’ve never driven the Million Dollar Highway.

I drove to the top of Mt Evans (14,264 ft.) about ten years ago, and I was petrified. By the time I got onto the upper five miles and realized how bad it was getting, it was too late. There was no room to turn around, no shoulder to pull on to. It was a paved road, but there were many stretches with no guard rail of any kind, and in some places much of the outer lane had crumbled away. My only choice was to keep going. After all, other people had driven and were driving the road; if they could do it, so could I. The view from the top made it almost worthwhile, if only there’d been a different way to get back down. But there wasn’t.

The Oh My God Road is well named and self-explanatory. I’ve haven’t actually driven it myself, but I’ve never forgotten the childhood vacation when my dad drove us all down that road. It may not be as scary as I remember, but I spent most of the drive not daring to look out the window and trusting that my dad could do anything, including drive that road. 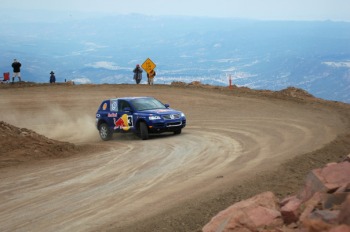 The Pikes Peak (14,110 ft.) road makes me nervous because much of it has no guard rails and it’s not paved*, but at least it’s very wide and well maintained. Still, it amazes me that professional drivers race up that road every year, drifting and sliding around corners that I navigate with extreme caution while staying as far from the edge as possible.

I’ve always considered myself a good driver, but for someone who has been a flatlander most of her life, these roads are, to say the least, challenging. Their lack of guard rails puzzles me.** I suppose one could argue that drivers can’t admire the view if there are railings; I would argue the driver has no business admiring the view while navigating such roads, but maybe the engineers are catering to passengers. Even so, a simple steel cable isn’t going to obscure that much. On the other hand, looking at that top picture, it’s pretty obvious there simply isn’t room enough to install guard rails.

I’ve had nervous moments on other mountain roads, too. Independence Pass (12,095 ft.) gives me pause. Most of it, as I recall, has low stone rails, but it’s steep, narrow, and full of switchbacks. So much so that trucks aren’t allowed on it at all and RV drivers have to plan very carefully.

Even I-70 westbound from Denver makes me nervous in places. There are some very long, steep grades that I don’t like going down. Everyone is driving 70 mph anyway, and then they just let their vehicles run on the downgrades. Of course there’s always another uphill stretch at the end of the downhill, but you’re likely doing 80-90 mph in heavy traffic with lots of 18-wheelers. The presence of “runaway truck” ramps is cold comfort.

Then there’s the time I was caught up on Trail Ridge Road (max. elev. 12,183 ft.), trying to get back to Estes Park. I ran into what I now know is “graupel,” a sort of soft, pea-sized hail. Slush balls, actually. It covered the road with icy slush and piled up on the windshield. Bad visibility, slick road. And I’d just entered a several-miles-long stretch above timberline that had no guard rails; sliding off the road meant possibly sliding thousands of feet into the valley below. I didn’t get out of the slop until I’d driven up and over the Divide and part way down the far side.

Maybe I’m as timid as I am because I once lost my brakes on a mountain road. Not an adventure I would recommend for the faint of heart. It was miles of steep grade with no place to pull over. I even had time to think about those movies of runaway cars where they slow down by scraping along a guard rail or hillside, although it didn’t come to that. As I neared the bottom and was contemplating the thrill of speeding uncontrollably into busy Boulder suburbs, I came to a side road that sloped up and just managed to make the turn. Where are those runaway truck ramps when you need them? Up is beautiful.

There’s no particular reason out-of-staters should be interested in Colorado’s scary roads, but for those of you curious about the world’s most dangerous roads, the AAA article included a great link to dozens of amazing photos. Check it out. It’ll give you a whole new perspective on that daily commute you grouse about.

(Note: I’ve not included Trail Ridge Road as a scary road because I don’t consider it scary. I urge tourists not to deny themselves this spectacular drive. The views and the experience are unforgettable and an essential part of any trip to this part of Colorado. The paved road is well maintained and well traveled, and there are low stone guard rails where you’d expect them. The only things scary or dangerous about this road are the weather and the traffic. Lots of pullouts and parking areas if you change your mind and want to turn around. My two favorite stops are Rainbow Curve and the Alpine Visitor Center.

*The Pikes Peak road was paved all the way to the summit in 2011.
**I’ve since learned that there are no guard rails because they interfere with the ability of plows to push snow off the roads.