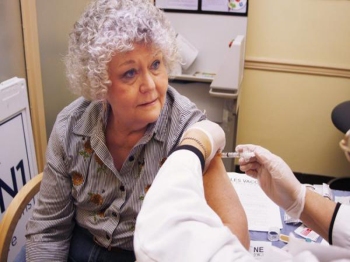 Over 60? Get a shingles vaccination

The planets finally aligned today and I got my shingles vaccination. I’ve been intending to do it ever since the vaccine was approved about five years ago. But I’d ask at the pharmacy, and the man who gave the shots wasn’t working that day. Or he’d say I shouldn’t get it so soon after my flu shot (bad karma between two viruses). Or the doctor’s office, if I thought to ask, was out of the stuff.

Anyway, I was at the doctor’s office today and she happened to ask about it because they had the vaccine (Zostavax®) on hand. Finally Jupiter had aligned with Mars! I jumped at the chance, and if you are 60 or older (CDC recommendation) you should, too. Some sources say the vaccine has been approved for those 50 and older.

You see, I’ve gone a round or two with shingles, and I don’t want to do it again. I was only 52 when it hit me. And it was definitely stress-induced. The medical association I worked for had its annual statewide meeting in April every year — always a hugely stressful time for the staff. My shingles outbreak struck a few days before the meeting. Luckily, one of the association’s officers was a dermatologist with an office only a few blocks away. And luckily, I got to him early enough to start the treatment that could mitigate the outbreak. So, luckily, the rash didn’t get nearly as bad as it could have if I’d waited even another day or two.

Still, for a week or so, I was miserable. Miserable. And it was another couple of weeks before the rash finally disappeared. There was no residual nerve pain (lucky again). But the next year, in April, just before the meeting, I noticed a few itchy, burning red spots …

There are conflicting reports about whether an outbreak of shingles confers immunity. And if so, for how long. One thing the reports do agree on: If you’ve ever had chickenpox (hasn’t everyone?), you have as much as a 50% chance of developing shingles by the time you reach your 80s.

Now, studies aside, let me say this, emphatically: You do not want to get shingles!

I was very lucky, caught it early, and had a very mild case. Mine was not so much painful as it was a miserable itching and burning that nothing could relieve. My dad had a much more serious, painful case when he was in his 70s or 80s. And I know it must have been awful if that stoic, uncomplaining man even mentioned it.

If you are still hesitating, check out the Google images. Those blisters are painful on their own; they can leave persistent, residual nerve pain (sometimes for years); and if they occur in your eyes, can blind you.

The bottom line is this: Ask your doctor about the shingles vaccine. And get it. Insurance coverage for it has been iffy in the past but is getting better. I had to sign a release saying if the insurance didn’t pay for it, I would — up to $250. I gulped, thought for a moment, and said, “You know what, if I got shingles again, I’d pay $250 in a heartbeat to get rid of it.”