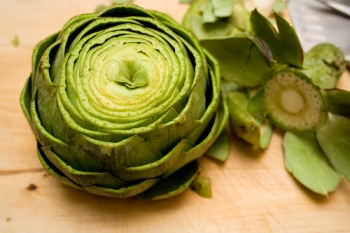 Artichoke ready for the pot

I’m looking forward to a tasty meal in an hour or so. There were some nice looking artichokes at the store today, so I grabbed one. Hard to beat a great fresh artichoke dripping in lemon butter. At least, that’s the way I’ve always eaten them.

I’ve fixed artichokes the same way for decades, never consulting a recipe. Unless you want to do something exotic, there’s no need for recipes. But for some reason I decided to look around for fresh ideas, and found several.

For example, I’ve always tossed some smashed garlic cloves into the cooking water, but someone on Simply Recipes suggested tucking garlic among the leaves of the artichoke and especially, poking some down the middle around the heart. Mmm. Can’t have too much garlic. Why had I never thought to do this? The main recipe also suggests tossing a bay leaf into the water. Never tried that. Sounds promising.

Lots of variations on dipping sauces were offered by readers, most either butter-based or mayo-based. I’ve always loved lemon butter, perhaps with a bit of garlic in it. Isn’t everything better with lemon butter? (I exaggerate. But only a little.) There’s nothing quite like finally getting down to the heart, cutting it into little pieces, and dropping them into the lemon butter to soak while you start consuming them, bit by buttery bit.

I probably owe it to myself to try some of the mayo dips, but I’ve got this problem with foods I really like … If I know I love a certain food prepared a certain way, I’m reluctant to try it a new way. After all, why take a chance on something I might not like as well, when I could have had something I know I love? Yes, yes, I know. It’s called being in a rut. Still …

A large artichoke can be a meal in itself, but I usually have something with it. Often some fish, which benefits from all the lemony buttery action. Because the artichoke is a bit of a production, I may just open a small can of red salmon. (Must be red sockeye. None of the pink stuff.)

It’s hard to believe there are a lot of people out there who’ve never eaten an artichoke. They do look a bit intimidating if you’ve never fixed one, but it’s easy, really. Come on, life is short; what have you got to lose? If nothing else, it’s a great excuse to slurp up lots of lemon butter!