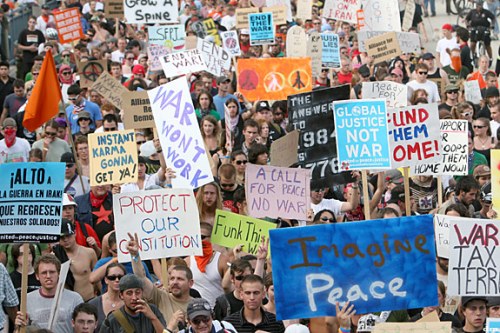 An innocent-looking little bill, HR 347, made its way through both houses of Congress last week and needs only President Obama’s signature to become law. The law is intended to clarify an existing statute that makes it a crime to trespass on any federal property or designated area protected by the Secret Service. In addition to obvious locations like the White House and U.S. Capitol grounds, restricted areas may be designated by the Department of Homeland Security. Such arbitrarily designated areas could include perimeters around traveling politicians or foreign dignitaries and, particularly in this election year, areas in which protesters or demonstrators are not allowed.

The bill drops the word “knowingly” from the existing terminology about “willfully and knowingly” trespassing. In scrapping “knowingly,” the bill makes it a crime to remain in a restricted area, even if you do not know it’s illegal for you to be there. Essentially it makes it easier for the authorities to arrest and prosecute demonstrators. Persons convicted under the new law could be sentenced to up to a year in prison and up to ten years if carrying a “deadly or dangerous weapon.”

Imagine the possibilities. Demonstrators at a political speech getting on someone’s nerves? Expand the designated restricted area and arrest them. (Or don’t explain it clearly to begin with.) And be sure to search them for dangerous weapons which could include, for example, cigarette lighters, nail files and clippers, tape measures, water bottles, and anything else forbidden by those noted experts in security and constitutional rights, the TSA.

The bill’s supporters in Congress have insisted such interpretations are incorrect. As noted in an Open Congress article:

[B]ill sponsor Rep. Tom Rooney [R, FL-16] tweeted: “H.R. 347 does not effect [sic] your right to protest in any way whatsoever. It deals with fence jumpers, not protesters.” But readings of the legislative text, federal statute, and legal precedent suggest that the bill’s supporters are simply unaware of the significance of the bill’s subtle changes in wording. As always with bills in Congress, it’s important to look at the potential for how it could be used and abused, not simply the intention of the members of Congress who sponsored it.

It’s always important to look at legislation’s potential, not just its intent. Rooney’s comment and this bill are a good example of an ongoing nationwide problem with legislation — unanticipated consequences, the passing of laws with no thought to or understanding of how the law could be abused and misapplied, or being “unaware” of the bill’s significance. Legislators should never be “unaware” of what a law might do. Yet too often laws are passed without anyone even reading them in their entirety. The 2,000-page health care reform bill (actually health insurance reform bill) was rammed through during the last few days of debate without anyone having time to read the entire bill in its final form. Oklahoma’s personhood bill is purported to be “merely a statement that Oklahoma is pro-life,” and yet its very brevity and simplicity leave the door wide open for innumerable interpretations.

And let’s not forget all the legislation that is actually written in full or in part by lobbyists and special interest groups. Busy legislators in debt to their supporters push such bills through (or worse, attach them as amendments to totally unrelated bills) without completely understanding their implications or impact. Lobbyists have their self-serving motives and they “help” make legislators’ jobs easier by crafting language for them. Everybody wins. Except the public.

Of course, in the case of HR 347, one must wonder if legislators truly are unaware of the bill’s possible effects — or if in fact they know precisely what they are doing and are planning ahead for this year’s sure-to-be-contentious presidential campaign.

__________
Related articles:
Inside that new anti-Occupy bill
U.S. Congress Has No Balls, Passes HR 347
Does H.R. 347 Change Anything About Your Right to Protest Politicians Under Secret Service Protection? It’s All In the Word Change
HR 347 threatens freedom of assembly – restricts political protest
HR 347: Goodbye Free Speech and Protest or a ‘Kerfuffle’?
Chipping Away At The First Amendment: New ‘Trespassing’ Bill Could Be Used To Criminalize Legitimate Protests