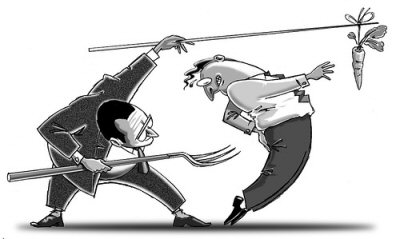 We insure things of value because we know if something happens to them, repairs won’t be free. Our health is a thing of value. Therefore we insure it. Except a lot of people don’t. They don’t because repairs are free at the nearest ER. Why pay to insure something when free repairs are readily available? Yet some way, somehow, those repairs must be paid for. Parts and labor — drugs, equipment, and doctors — are expensive.

Enter the U.S. government with the Affordable Care Act and its mandate that everyone buy health insurance or pay a penalty (one way or another, they’re going to make you pay).

Instead of a stick (the mandate), why not a carrot (cheaper insurance)? Rescind the McCarran-Ferguson provision that exempts health insurance companies from federal anti-trust laws; force them to compete like other for-profit companies. Nothing like a little competition to keep prices down — even if the competition is a public option from the government. The original ACA legislation included a public option but it was cut before final passage; it should be brought back. In addition, consider rescinding the EMTALA requirement that hospitals provide free ER care; it’s a disincentive to buying insurance and it greatly increases hospitals’ costs, forcing rate increases in other departments.

If the government’s stick, currently being examined by the U.S. Supreme Court, is declared unconstitutional, perhaps carrots should be employed.