Becoming Tom Clancy: My letters from Tom – Part 4 of 4

This is the last of the four letters I received from Tom Clancy in the period surrounding the publication of The Hunt for Red October. As you’ll see, he was very busy in March 1985 and chronicled his activities in increments as time permitted. The result was 14 pages of detailed observations and pithy remarks about lunch at the Pentagon, his first appearance on national TV, and two visits to the Reagan White House — first impressions from someone who, only a year before, had been just another Maryland insurance agent.

Because of its length and the time it took to print it (35 minutes for 14 pages!), Tom printed the letter once and then photocopied it for several recipients (I’ve no idea who or how many). The cover sheet was typewritten.

For those not planning to read “every damned word” as he wrote it, here’s a rough guide:

Page 1 — Lunch at the Pentagon (“the IDEAL place to play Dungeons and Dragons”), where he was made an official honorary submariner

Pages 2-4 — Preparations for an appearance on “Good Morning America” — after two last-minute postponements (“Ever wonder how Caryl Chessman felt?”) and an intervening radio interview

Pages 5-8 — First visit to the White House to meet Pres. Reagan (“This guy could charm the fangs off a cobra”) and have lunch

Pages 9-10 — A second visit to the White House for morning coffee with assorted celebrities and to formally meet and greet the President and his guest of honor, Argentine Pres. Alfonsin (“The ‘Old Guard’ Fife & Drum of the 3rd Infantry did a fife-by”)

Pages 11-14 — Description of the state dinner later the same day. (“The salmon was garbage, but everything else was spiffy.”) A photocopy of the menu was included; somehow I managed to lose it. 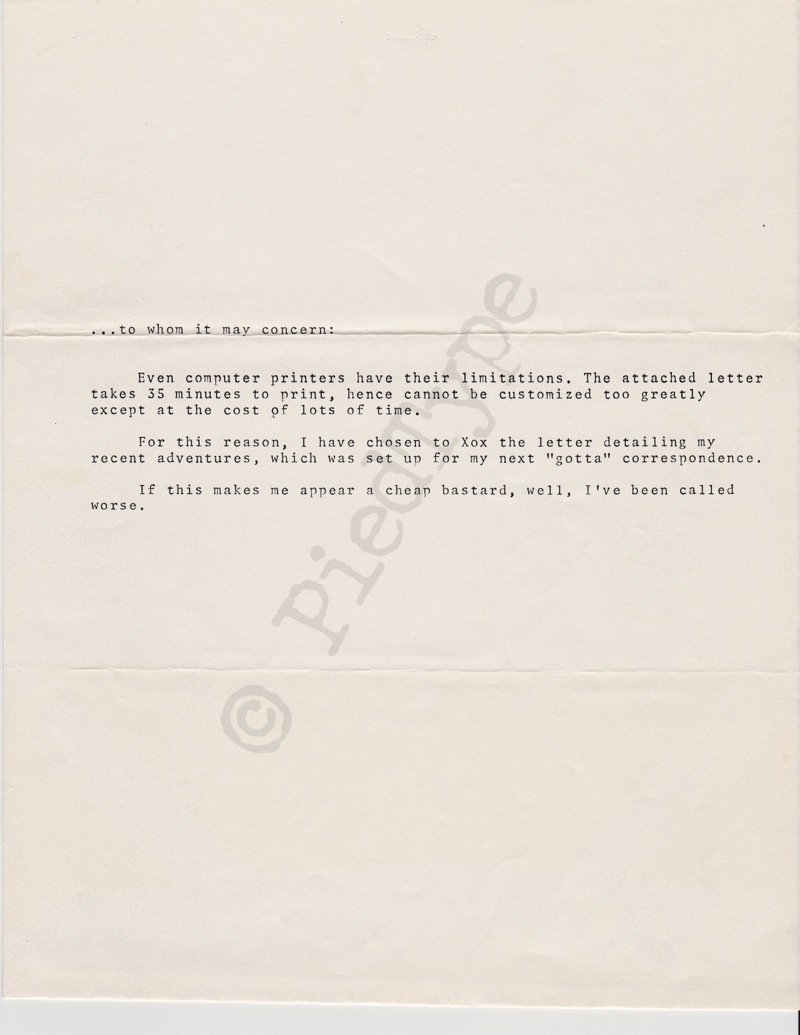 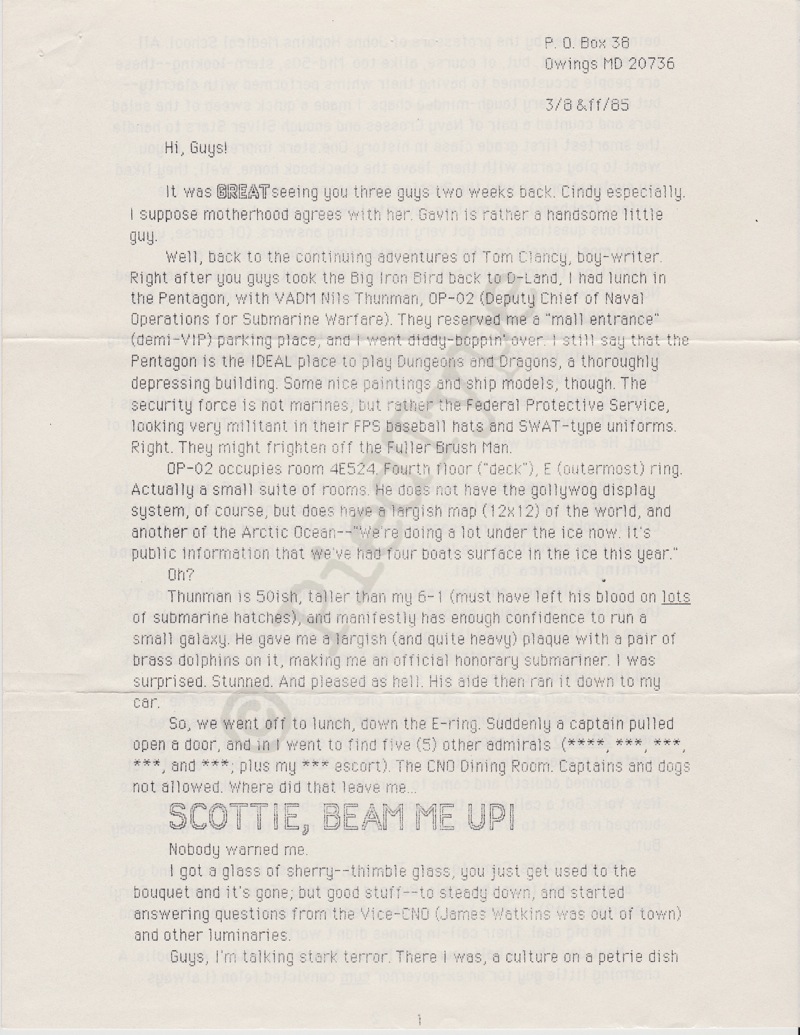 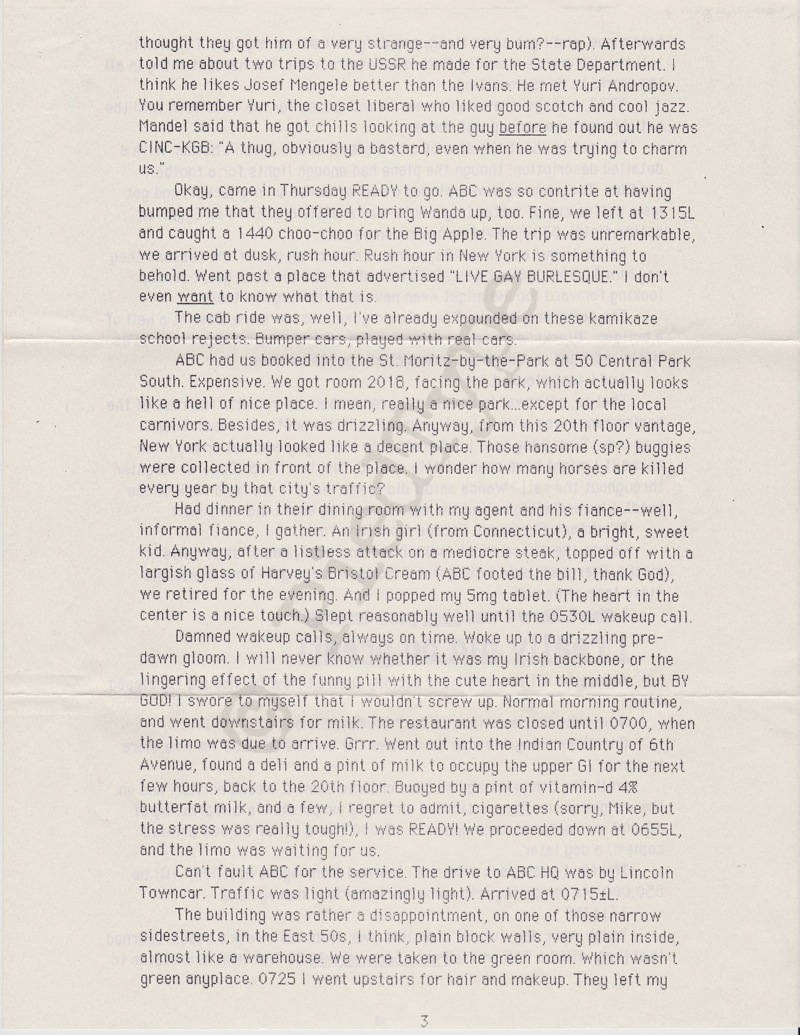 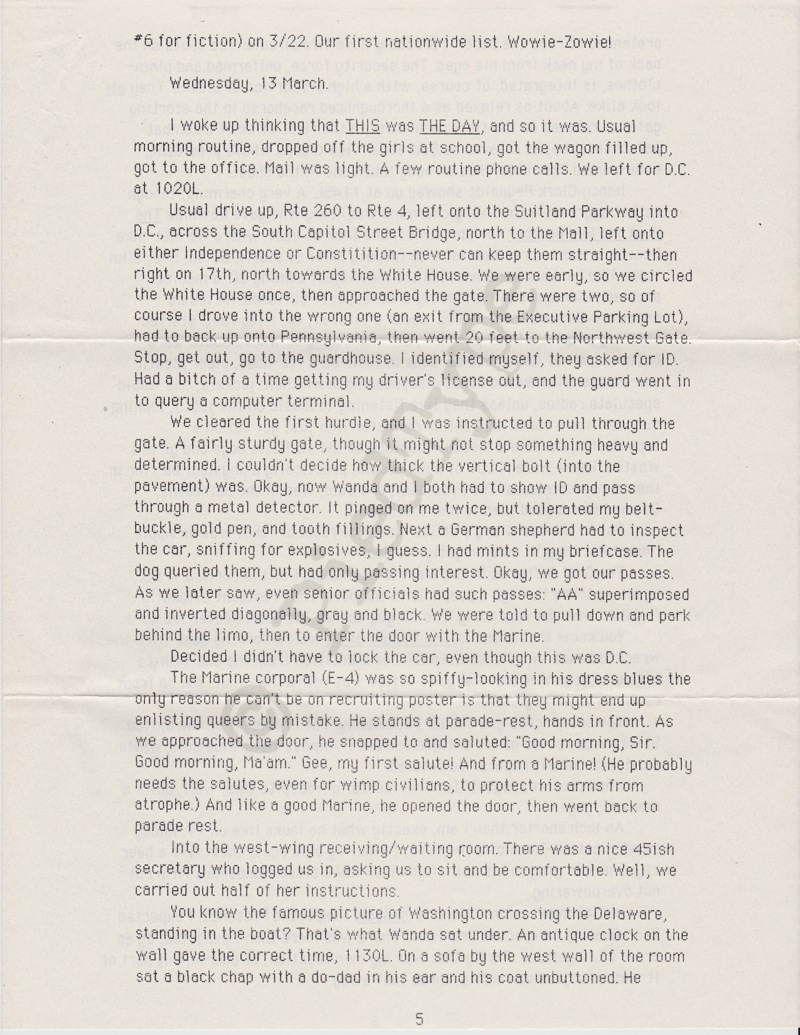 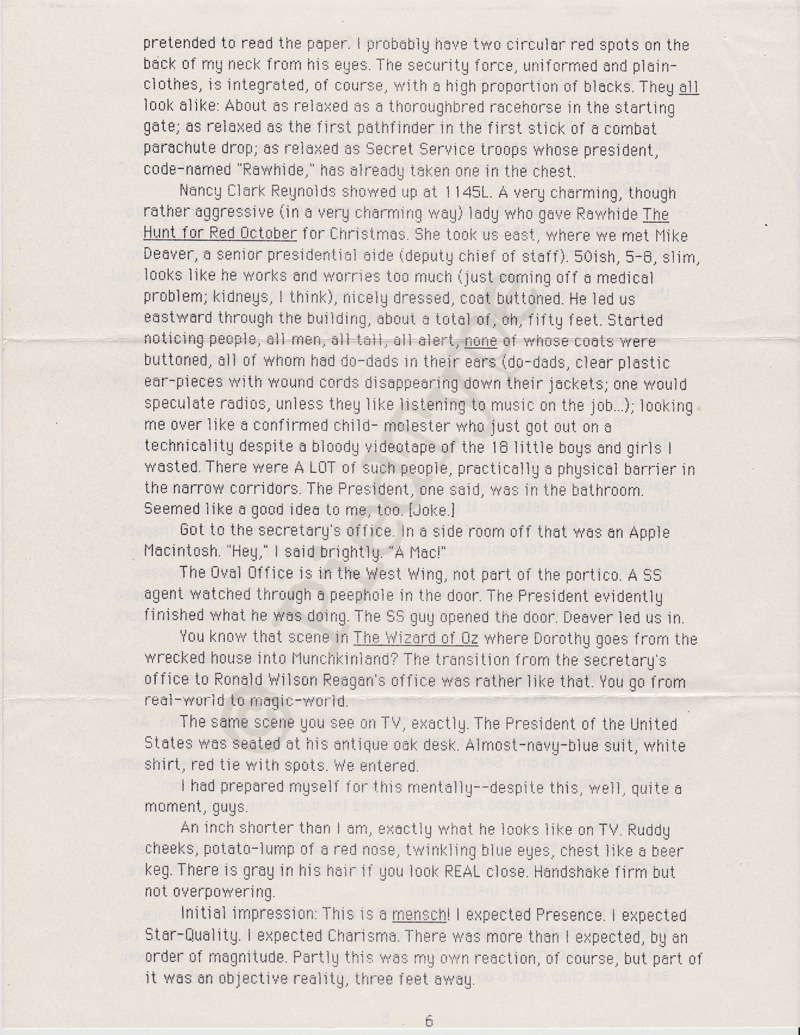 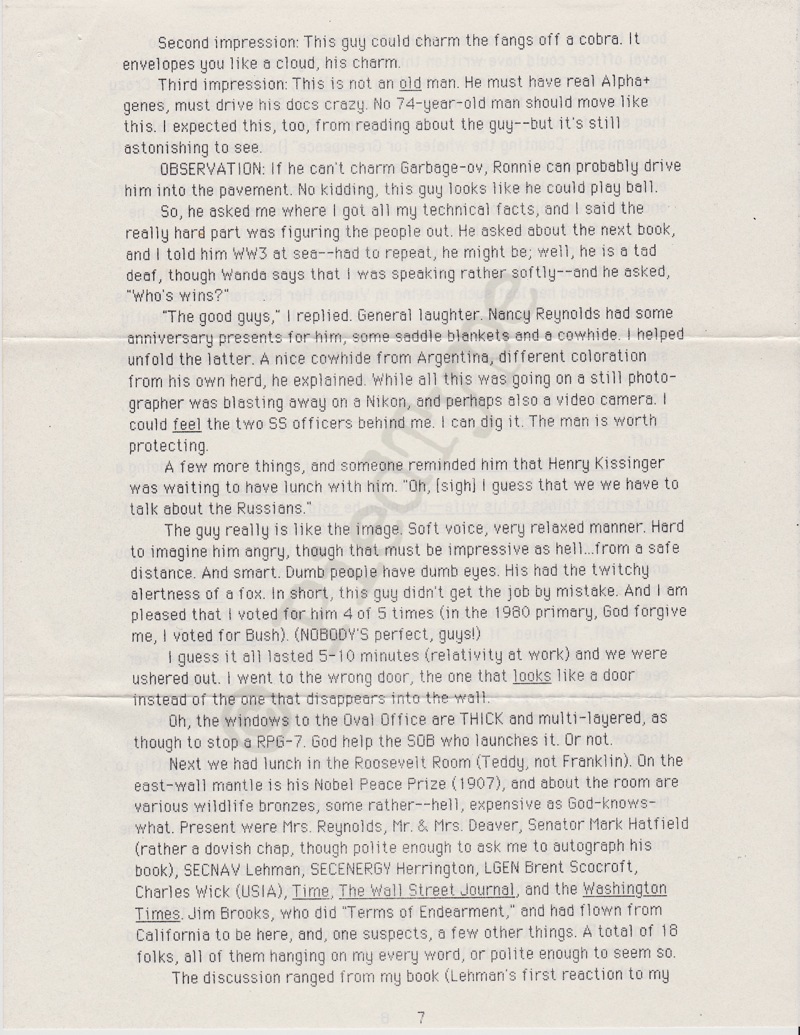 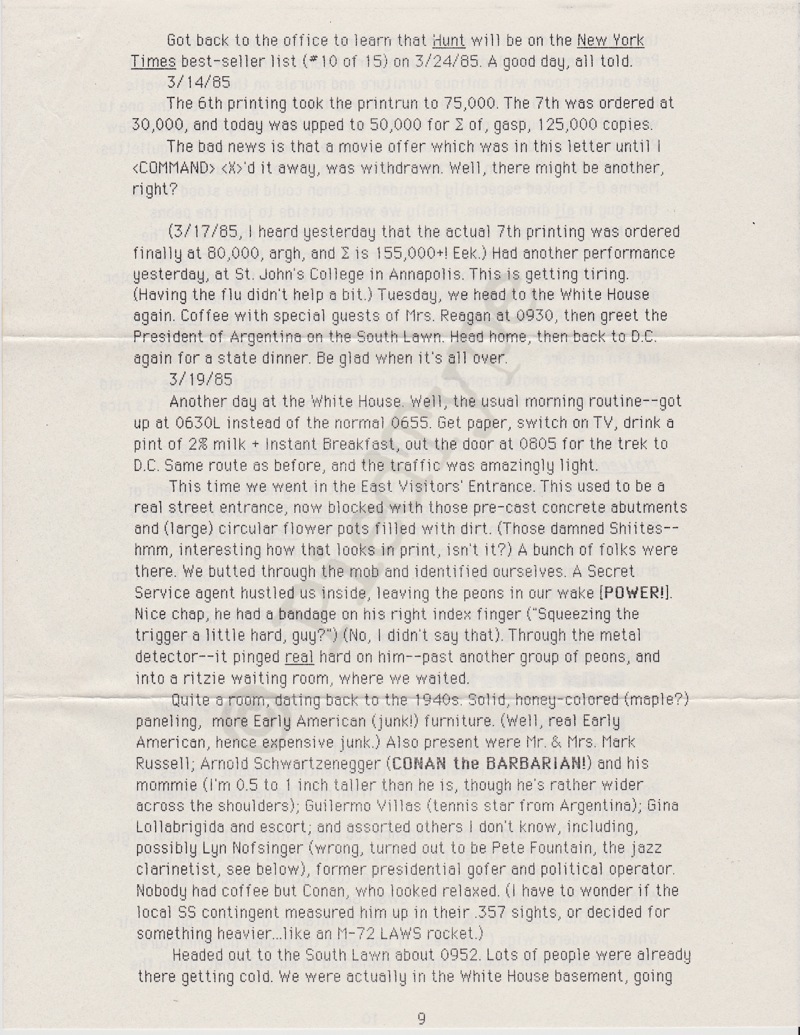 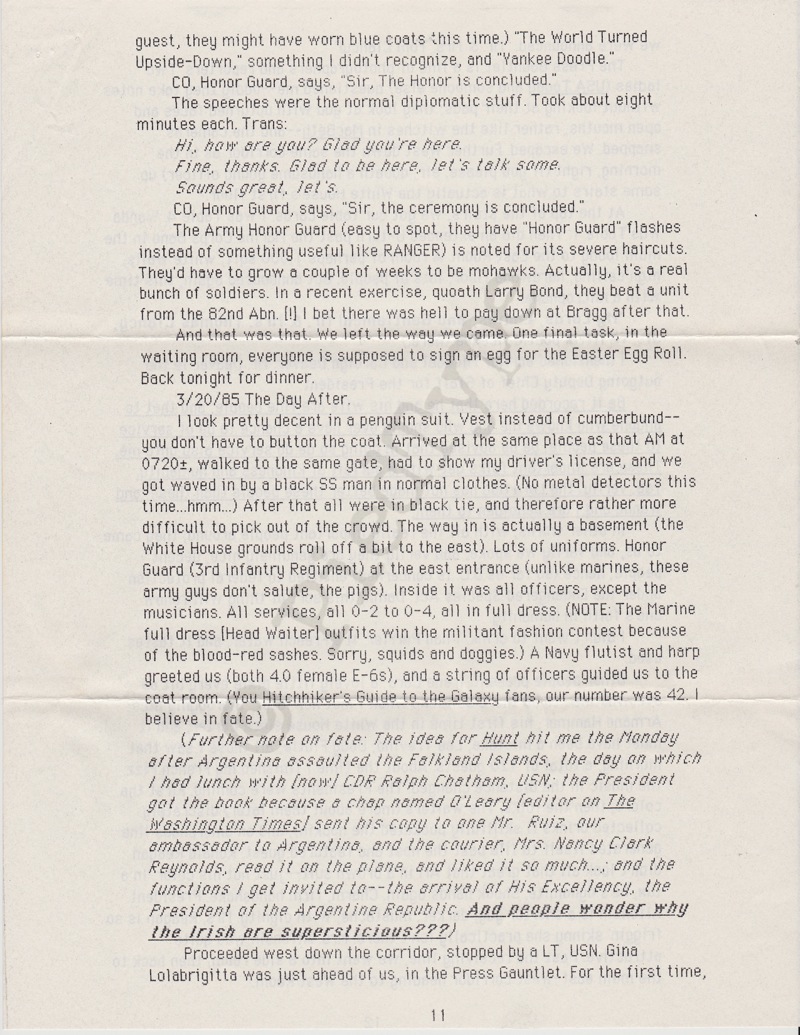 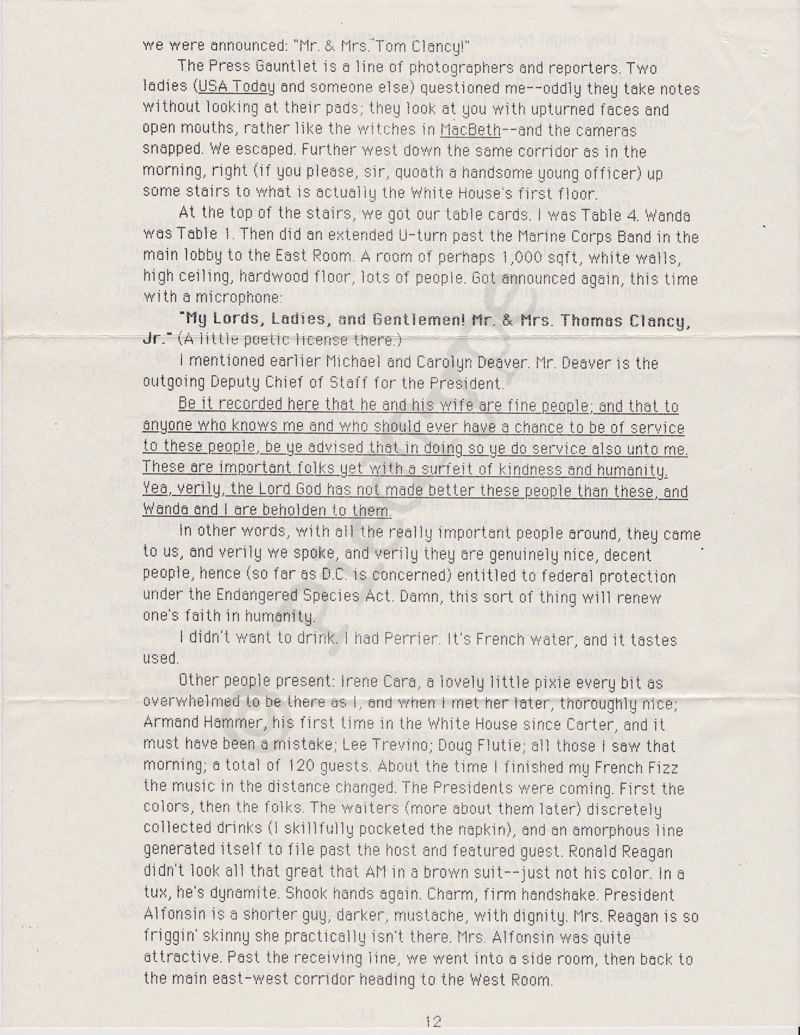 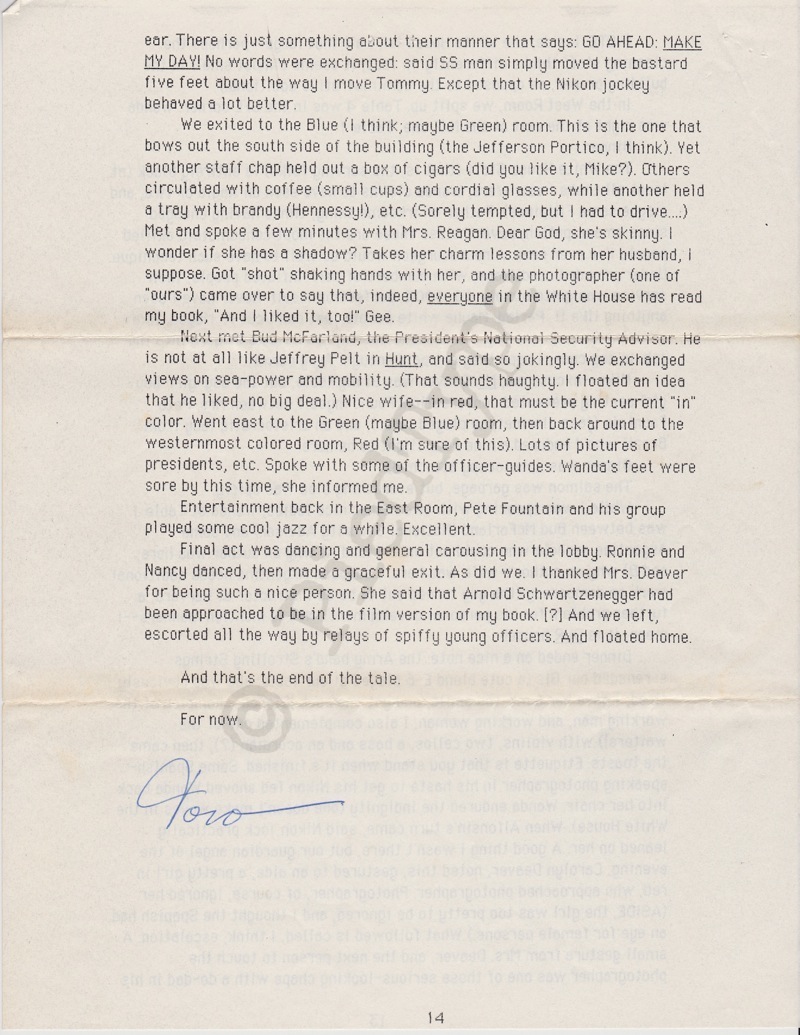 “The odds against becoming the next Frederick Forsythe are, of course,
somewhere between merely exponential and astronomical-incredible.
I’ll settle for a book-jacket with my name on it.”


(There are more than 100 million Clancy books in circulation, compared to Forsyth’s 70 million.)