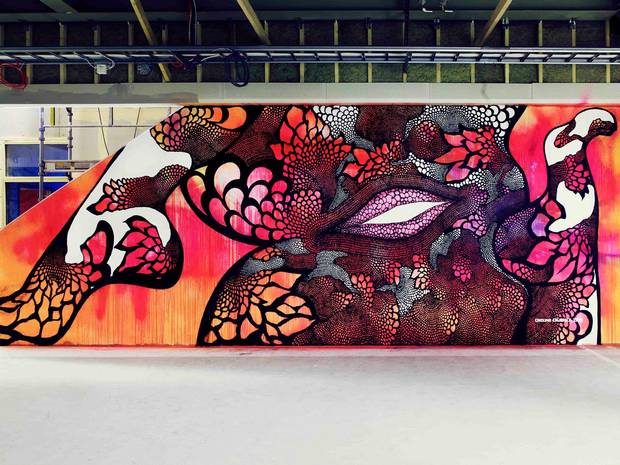 In Nyköping, Sweden, a debate erupted last month over the appropriateness of a “smiling vagina” mural in a junior high school. The artist, Carolina Falkholt, painted the mural on a staircase in a school populated with 13- to 15-year-old students. Well known in Sweden, she frequently features vaginas in her work.

The controversy began when the municipal head of children, youth and cultural affairs in Nyköping announced that authorities had decided to paint over the artwork. Inappropriate in a school, they said. But the uproar had begun, on Falkholt’s Facebook page and elsewhere. Authorities agreed to delay any action while the debate continued.

The school’s principal, meanwhile, likes and defends the mural: “I see many pedagogic advantages to having her art in the school.”

He is supported by the vice-chair of the local culture and leisure committee, who says he dislikes censorship: “Should we censor this just because it depicts female genitalia? Maybe the students think this is a really cool thing, that they have a school that dares!”

Apparently the Swedes are far more liberal and open-minded than I am. I think the mural is totally inappropriate for a middle school. And I wouldn’t particularly like seeing it in any public place. I like the style, technique, and colors, and I don’t object to nudity in art per se. I just find the pose objectionable.

I know, I know. I’m just a prudish, inhibited old lady. So be it.