WBC run out of Moore, OK

Hats off to Moore, Oklahoma. A contingent from the Westboro Baptist Church hate group showed up there on Sunday to picket. Why? Because of a sign put up by Moore Liquor shop owner Bryan Kerr to celebrate the May 19 death of the church’s founder, Fred Phelps, and also, according to the church, because an F5 tornado that flattened large areas of Moore last May and killed 24 people was an “example of God’s wrath.”

Waving their “God Hates Fags” signs along with “God Hates Oklahoma” signs, their planned half-hour demonstration lasted all of eight minutes. When angry Moore counterprotesters began to advance past intervening police officers, the WBCers bolted for their cars.

There’s a bit of a back story here explaining Moore’s intense dislike of WBC (as if anyone needs a reason): In the wake of the tornado last May, WBC threatened to picket the funeral of 9-year-old victim Nicolas McCabe. Although they were seen in nearby Norman, OK, they never appeared at the funeral — maybe, just maybe, because hundreds of bikers, the Patriot Guard Riders, had assembled to protect the funeral. 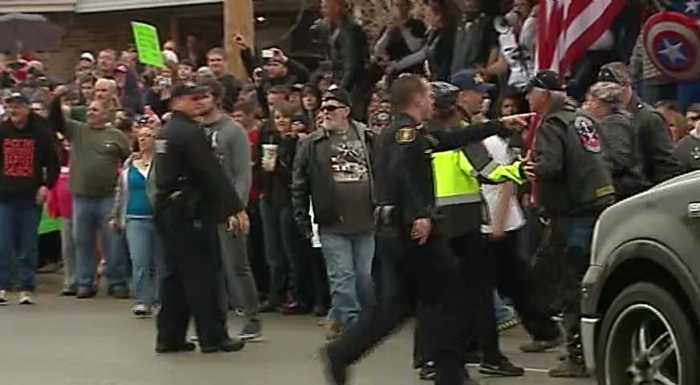 Angry Moore residents were ready with their own signs. (Photo: KOCO)

Had WBC dared to show up at McCabe’s funeral last year, this is what they’d have seen. (Photo: Reddit / darsilmaos)