What difference at this point does it make? 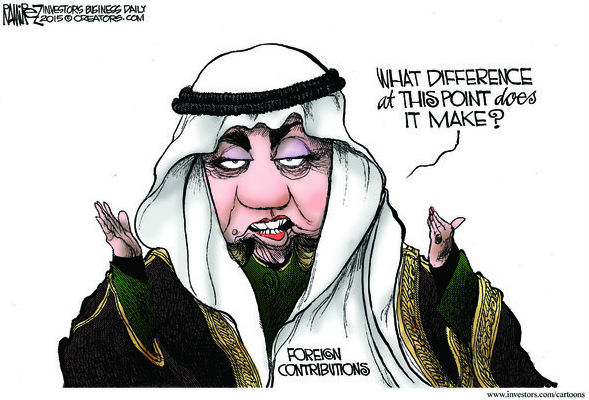 Hillary Clinton has yet to declare her candidacy for president, and who can blame her. Campaigns are grinding, brutal, ugly rat races. Besides, she’s the inevitable, already-annointed Democratic nominee.

I’ve never been a big Hillary fan.* And now I’m really I hating her “inevitability.” I wish Elizabeth Warren or some other viable Democrat would run so I could vote next year without holding my nose.

And all that was before this week’s revelations about Hillary. What’s with the huge foreign contributions to the Clinton Foundation (now the more awkwardly named “Bill, Hillary and Chelsea Clinton Foundation”)? They wouldn’t have been a big deal if she weren’t a government official, but they look mighty questionable coming while she was Secretary of State. No, no, of course those foreign governments weren’t trying to buy influence; their donations were purely humanitarian in nature, to do good in the world, to help the Haitian earthquake refugees, etc. Yeah, right. There’s always the Red Cross for that.

It doesn’t matter that said contributions were in accordance with the contorted laws governing such contributions. The mere appearance of impropriety is what matters. That’s what voters will understand and remember. The Clintons could have refused such contributions, but they didn’t. They knew full well that one or both of them might run for office again, but they accepted the money anyway. Not good.

Then yesterday we found out that during her time as Secretary of State, Hillary did not use official government email for her correspondence. She used her private account for all of it. Seriously? There are obvious security concerns; private email accounts are hacked every day. And there are rules about securing and archiving government records, which of course include the Secretary of State’s correspondence. Again, at the very least, there’s the appearance of impropriety.

“What difference –- at this point, what difference does it make?” At this point it makes a big difference. There’s too much impropriety (or possibly worse), too much ammuntion for her opponents. I’m not at all happy with her being the only Democratic candidate and I can’t stomach any of the Republicans currently vying for the GOP nomination.

Sure, a lot could change between now and November 2016. Maybe another Democrat will enter the fray. Maybe Hillary won’t run.

Most women supported Hillary, so why didn’t I?

Inside Hillary’s head: What is that woman thinking, anyway?