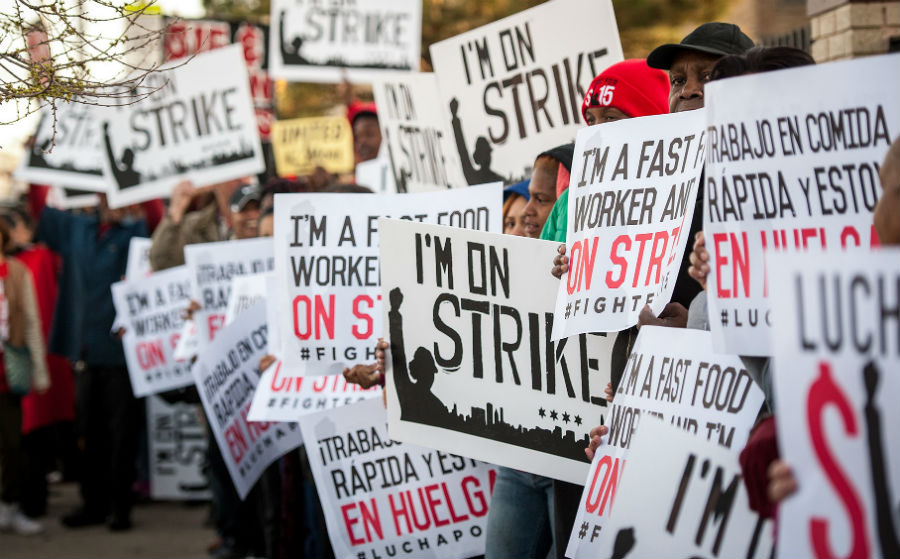 As a retiree, I’m a long way past worrying about minimum wage jobs. The last time I thought about them seriously was when I was looking for summer jobs in high school and college.

I’m not the sharpest crayon in the box when it comes to economics and finance. So I’ll admit I’m a bit perplexed by today’s “Fight for $15” demonstrations. They seem to be centered on McDonald’s but include a number of other businesses that pay minimum wage. I’m perplexed because I don’t understand how people who have part-time and/or entry level positions that require no education or previous experience expect to demand and get a “living wage” for doing those jobs. Those jobs are not and never were intended to provide a living wage, to be the sole support for an individual and certainly not for a family. Sure, if wishes were horses, etc. But those are bottom-rung, bottom-of-the-ladder jobs intended to be part-time, temporary, after-school, pocket-money jobs. And people who aren’t content with that are free to leave; they can be easily replaced by the next teenager looking for a part-time job.

People who want a living wage, a livelihood, something on which they can survive and perhaps raise a family, need to go to school, get some training, learn a trade, and/or go to college. You have to learn the skills and earn the right to higher paying jobs. You don’t walk off the job you claim to need so desperately, strike, picket, and have a hissy fit on the street demanding $15 an hour. Not if you want to keep that job. What have these demonstrators done that warrants paying them more than what they’re making now? Did they absorb some additional education or training overnight? Are employers supposed to double their pay just because (or in spite of the fact that) they walked off the job? Have they forgotten the lesson of Ronald Reagan and the air traffic controllers?

Oh I’d be the first to agree that minimum wage should have been raised years ago and needs to be raised now. And I agree it should be tied to the rate of inflation and increase accordingly. And I’m sure there are plenty of companies that take advantage of the fact that it hasn’t increased and continue to pay employees that unfairly depressed minimum wage.

But where does the $15 number come from? Has somebody calculated that it’s the magic number that would result if minimum wage had been going up with the rate of inflation for x number of years? Even if that were the case, I doubt businesses could sustain an abrupt increase that big (the current federal rate is $7.25 an hour). Maybe a gradual increase spread over several years would work. I don’t know. But I’m sure there are many small businesses, barely surviving, that would go under if they suddenly had to double the pay to some of their employees.

And why picket the businesses? Isn’t it up to cities or states to raise the minimum wage? Shouldn’t picketing take place at city halls and state capitols? It’s not likely many employers will start paying more unless the law requires it or the market demands it.

Many of the picketers are also demanding a union. That idea, and the day of protest, are being led at least in part by the Service Employees International Union (SEIU). As I’ve noted in the past, I think unions are an anachronism. Their original purpose of ensuring safe working conditions and eliminating child labor has been taken care of with legislation. Today they seem to exist only to pressure for higher wages which may or may not be deserved and which employers may or may not be able to pay, and for more benefits and job security which, again, employers may not be able to afford. (They are, of course, a good way to blackmail employers, collect dues to support their leaders, ensure job security for bad employees, and contribute to political groups that individual members might not support … )

(I’ve warned you before, I’m liberal on some things, conservative on others. Neither party has all the answers. And it’s a cinch I don’t.)

We’ll always need minimum wage jobs, jobs that require no experience or education, that are part-time or temporary or entry level for people who need jobs like that. Such jobs are the bottom rung of the economic ladder that every worker hopes to ascend. But there has to be a bottom rung or there’s no way to even get on the ladder.