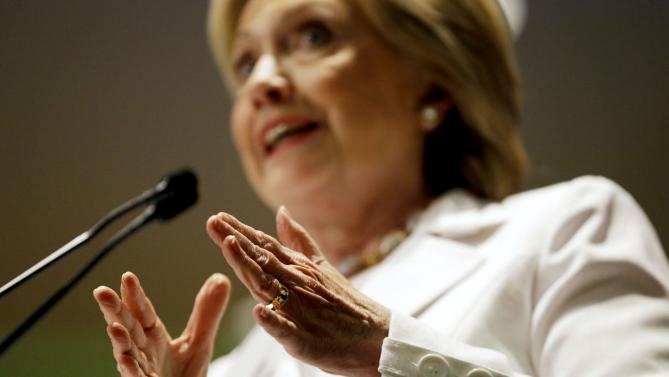 The Washington Post has reported on an interview in which former Daily Show host Jon Stewart described the problem with Hillary Clinton. And he nailed it precisely. Which is to say, he described precisely what I think about her every time I see her speak. She’s not genuine. The person at the microphone is a robot, a much better one than Marco Rubio but still a robot. Every word is carefully scripted and rehearsed. Every gesture carefully practiced and deliberately executed. It’s terribly distracting. Especially when she triumphantly delivers a punchline as though expecting a reward (or at least a few votes). Like her response to Trump’s “woman’s card” accusation. She said, “… if that’s playing the woman card, then Deal. Me. In!” I groaned so loudly they probably heard me in Washington.

The hand gestures really bug me. The tight little fist punching the air. (Don’t let that thumb loose, and don’t you dare point with that index finger!) The magnanimous open arms pose, with the fingers glued tightly together and rigid. (Reminds me of the SNL bit with the tiny hands lady and her inflexible little plastic hands.) And of course the excited pointing to imaginary friends spotted in the audience (as taught in Performing 101).

But I digress. Stewart went straight to the why of it all. Why does Hillary speak so carefully and unnaturally? Why is she so rigid and carefully rehearsed?

In a recent podcast interview with Democratic strategist David Axelrod, Stewart described Clinton: “What I think about Hillary Clinton is — I imagine to be a bright woman without the courage of her convictions because I’m not even sure what they are. So I would suggest that when I watch her campaign it reminds me of … Magic Johnson’s talk show … It never seemed authentic and real to his personality. It seemed like he was wearing an outfit designed by someone else for someone else to be someone else. … maybe I’m wrong. Maybe a real person doesn’t exist underneath there.”

The Post’s Chris Cillizza summed it up:

Regardless of the reasons (and how justified they may nor may not be), the Clinton that voters meet tends to be someone who comes across as overly cautious and too political — afraid to say what she thinks about anything for fear of alienating this or that constituency.