Tenting tonight … or not 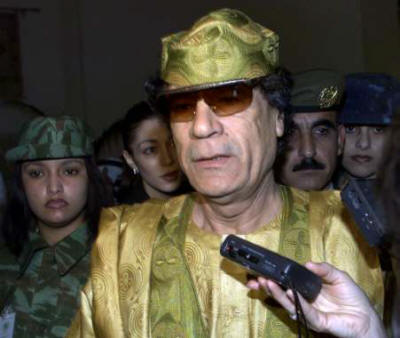 Libyan leader Moammar Gadhafi (one of many spelling variations, including “thug”) won’t get to pitch his tent on Donald Trump’s Bedford, NY, property after all. Boo hoo. The Donald usually gets to do what he wants, but apparently there were some people in Bedford who put principle and city codes above money.

Gadhafi, here to speak at the UN, recently enraged the civilized world by giving a hero’s welcome to the man who blew up Pan Am 103 over Lockerbie, Scotland. But having done nothing to land himself in jail, he continues to globe trot as he pleases.

It is his habit to take along and live in a large bedouin tent, air conditioned according to one source. And maybe that’s fine in the middle of some Middle East desert. But it’s a bit large and unsightly in the middle of a modern metro area. MSNBC reported this evening that little Moammar prefers his tent because he’s actually afraid of elevators — like those found in big hotels. I suggest he ask for a room on the second or third floor and walk up. Or perhaps some friendly New Yorker could direct him to the nearest one-story motel.

A man of his repute is lucky to have been allowed into this country at all  (even though technically the UN is not this country; it’s every country and no country). Expecting us to also provide him a place to pitch his very large tent (he first suggested Central Park) is overreaching just a tad.

Besides, I’d think he’d want something more bulletproof than a tent.