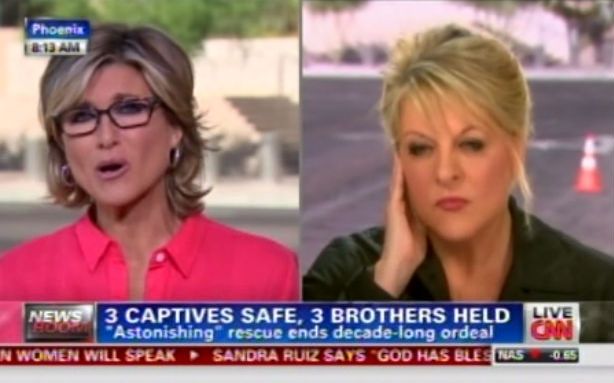 It would be laughable it if hadn’t been one of America’s most well-known news outlets. So I suppose that just makes it pitiful. No, scratch that; it really is laughable. Jon Stewart had a ball with it last night. He loves to pick on the “real” news channels, usually Fox News. But lately CNN has provided sooo much irresistible material.

He got this Nancy Grace vs. Ashleigh Banfield story from The Atlantic Wire, where I encourage you to read the details for yourself (and don’t miss the follow-up story linked at the end). Banfield (CNN) is in Phoenix supposedly doing a remote interview with Nancy Grace (HLN, owned by CNN) in Cleveland or elsewhere. But the sharp eyes at The Atlantic quickly realized the two women were actually standing in the same parking lot about 30 feet from each other. Watch the cars in the background:

Why CNN would do something so ridiculously transparent is anyone’s guess. The fact remains this was a clumsy, amateurish attempt to deceive viewers and drops CNN another couple of rungs on the ladder of “trusted” news sources.

At the end of their story, the two Atlantic Wire reporters, Dashiell Bennett and Philip Bump, display their professionalism:

(Disclosure: The two authors of this post are in the same office, sitting about five feet away from each other.)