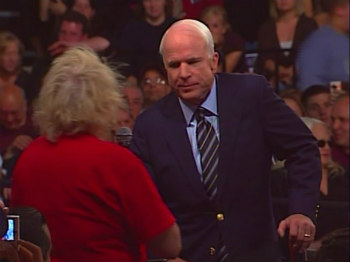 McCain speaks to a woman in the crowd

Republican presidential candidate John McCain has suggested that he and Democratic opponent Barack Obama appear together in a series of town hall meetings. No network moderators, no canned questions from hand-selected audiences, just two candidates interacting directly with the audience.

That’s probably an idealized image of the situation, since there would have to be some kind of security, crowd control, and organization in place. Nevertheless, after the long series of carefully scripted “debates” the electorate has been subjected to so far, the town hall model sounds refreshing and full of potential.

The hitch, of course, is that McCain is much better than Obama at this kind of gathering. Watching McCain deliver a speech is a truly cringe-worthy experience and his handlers are no doubt aware of it. He does much better in a casual setting, answering assorted questions from the crowd.

Obama, on the other hand, delivers speeches like JFK but is a bit awkward with unscripted give and take. His slow, thoughtful professorial style is not geared to the quick pivots of audience interaction.

While the town hall format appears to favor John McCain, it’s an opportunity that Obama should embrace. What he lacks in agility, he makes up for in charm, intelligence, and charisma. Town hall meetings seem like an obvious format in this face-to-face, instant response, YouTube world and a great way to really get to know the candidates. Let the meetings begin.