Crimea and the Clancy coincidence

Reports vary, but it appears the Russians may have invaded Crimea, the southern peninsula of Ukraine, an independent, autonomous republic. Airports were seized, TV stations surrounded, telephone and cable communications cut. By nameless, masked men in army fatigues, who arrived by helicopter. No identifying marks on their uniforms, their equipment, their aircraft. And the latest development: Russian tanks appearing in Ukrainian territory.

The Russians announced a few days ago that they would be conducting military exercises in the area. Ukraine is calling it an invasion. The U.S. government is calling it an “uncontested arrival.” What on earth is Vladimir Putin doing? Did he think we wouldn’t notice? Did he think the lack of obvious markings would fool anyone? Does he really think he can get away with a takeover? (Who’s going to stop him?) Did he think making everyone all warm and fuzzy at the Sochi Olympics would lull the world into inattention?

Does he think so little of Obama’s resolve? Well, he has reason. After that red line in Syria that … wasn’t. And our withdrawals from Afghanistan and Iraq. And more downsizing of our armed forces. What are we going to do, send drones into Ukraine?

Geographically, one can understand Russia’s interest in Crimea and the port of Sevastopol — home of the Russian Black Sea Fleet and the Russian Navy’s only warm water port, with access to the Mediterranean and the rest of the world (see map below). Many of Ukraine’s Russian-speaking citizens — Russian Navy personnel, retirees, and their descendants — live in Crimea. Russia has a long history here.

At least one report, however, says the port is no longer that important to Russia, that there are only a few dozen outdated ships based there, and that in fact the Russians have been planning to redeploy the force to Novorossiysk, just up the coast from Sochi.

The whole thing, with its Cold War overtones (including a Russian warship that made a surprise stop in Havana this week), is disturbing. It looks like Russia is trying to reassert itself in a Ukraine in turmoil, make sure the country doesn’t turn to Europe and the West, and secure the port of Sevastopol, which it leases from Ukraine. Or perhaps it’s all just a matter of Russian pride. Or Putin’s pride. And other than threatening not to show up for the Sochi G8 summit in June, we have no leverage in the region. We’re in no position to tell the Russians to stay out of Ukraine. And we’re in no position to make them stay out.

There don’t seem to be any answers tonight. Just a lot of questions.

And somewhere Tom Clancy is smiling and nodding his head. In his last co-authored novel, Command Authority, published in December, the Russian president, a ruthless former KGB agent, seeking to return Russia to its glory days, invades Ukraine.

Hmm, I wonder if Putin is a Clancy fan … 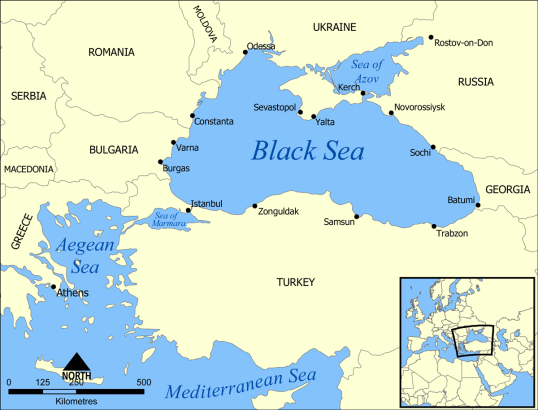