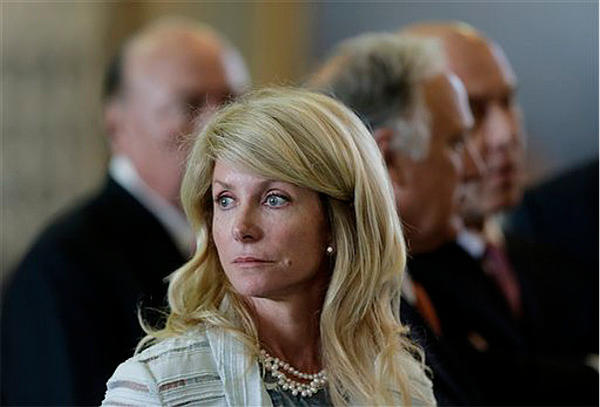 She could be an actress. A Hollywood celebrity. Perhaps some wealthy athlete’s trophy wife. But she is none of these. She is Texas State Senator Wendy Davis (D), newest hero of pro-choice advocates across the country.

On Tuesday Davis undertook a filibuster to block passage of a bill that would have severely limited the abortion rights of Texas women. She was on her feet for some 13 hours. The rules forbade her sitting, receiving assistance from anyone, straying from the subject, leaning on her desk, or taking bathroom breaks. And she prevailed. Although an adverse ruling cut her off before the session ended at midnight, her Democratic colleagues and hundreds of cheering, shouting supporters in the gallery created enough of an uproar to prevent a vote before time ran out.

Davis beat an incumbent Republican to win her Senate seat in 2008. Since then, as detailed by Wikipedia, she has been a force to be reckoned with:

Davis has been honored with many awards and recognitions during her first term in the Texas Legislature, including the “Bold Woman Award” from Girls, Inc., “Freshman of the Year” from AARP, “Champion for Children Award” from the Equity Center, and “Texas Women’s Health Champion Award” from the Texas Association of OB-GYNs. In 2009, Texas Monthly named her “Rookie of the Year”. She was also chosen by the readers of Fort Worth Weekly as the “Best Servant of the People”. In January 2012, Davis was listed among “12 State Legislators to Watch in 2012” by Governing Magazine and is mentioned as a possible candidate for statewide races.

I look forward to seeing Wendy Davis in Washington in the next few years, defending the rights of women across the country.