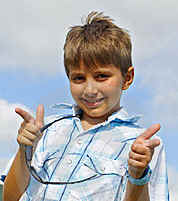 A ten-year-old boy in Ohio, Nathan Entingh, has been suspended from school for three days because he made a pretend gun with his fingers and pointed at a fellow student’s head. The incident followed a number of warnings issued at the school about inappropriate behavior and is a violation of Ohio’s zero tolerance law for schools.

The 1998 law, SB 55, mandates schools “adopt a policy of zero tolerance for violent, disruptive, or inappropriate behavior, including excessive truancy.” SB 55 also calls for schools to “establish strategies to address such behavior that range from prevention to intervention.” Nowhere does it say suspension. Prevention and intervention are things teachers and principles do in the course of their responsibilities. Suspension is an abdication of their responsibility. It’s a punt, to avoid having to think and assume responsibility for properly dealing with the problem on scene, immediately. The only thing worse are those schools that call the police to come arrest recalcitrant students and take them to jail. In those cases the kids are traumatized, the police are wasting their time, and the teachers and principals have, once again, avoided taking responsibility for what goes on in their school.

According to the CNN report:

It’s shameful. If you don’t want the responsibility of dealing with children, if you can’t handle them effectively short of just sending them home and getting them out of your classroom, then you shouldn’t be in the classroom in the first place.

The problem, of course, isn’t kids who point fingers. Where we really need zero tolerance is with adults who insist on owning, carrying, and pointing real guns. But that’s too hard and might cost us the next election. So we inflict it on our kids instead — as though suspending Nathan Entingh were going to stop the next school shooting.