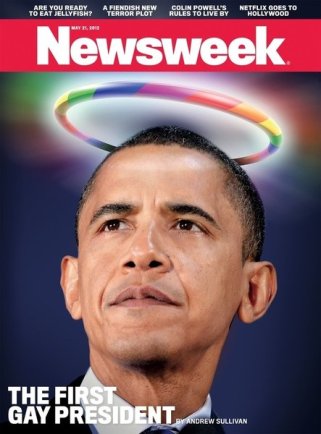 Must be the silly season for magazine covers. First Time magazine sports a bare-breasted mom nursing her three-year-old, and now Newsweek has declared Obama “The First Gay President.” The race to the bottom has really heated up, hasn’t it? Decades-old highly respected news magazines venturing into the realm of shock and misrepresentation, all to generate sales. So much for professionalism and reporting straight news (no pun intended). Now they dish it out with covers rivaling the supermarket tabloids.

Of course we know they don’t mean Obama is gay. (You do know that, right?) They’re referring to his announcement that he supports gay marriage — the first president to do so. That’s a huge difference. There was a time when publicly calling someone gay when they weren’t might have been grounds for a lawsuit. But that’s exactly what Newsweek has done. Worse, however, is simply that the statement is a misstatement; it’s factually inaccurate; it’s a deliberate distortion. The assumption that everyone will know what was meant is no excuse. It’s a cop-out for an editorial department that couldn’t do something imaginative and provocative with the truth.

Sad what’s become of the profession I once knew.