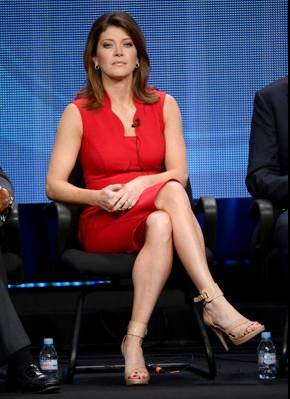 What should female journalists wear on television? The Washington Post addressed that issue yesterday with an article entitled “The colorful evolution of newswomen’s attire.”

To anyone who watches TV news, it has become obvious that female anchors no longer feel constrained by the old “dress for success” style of dark suits and conservative blouses that emulated their male counterparts. It seems only right that women soften their look a bit; after all, there is a difference between the sexes.

Nevertheless, after decades of dominating the world of business and communication, men still wear suits and ties. Perhaps there is a certain unspoken but agreed upon decorum among people who are serious about what they do. So should the women in TV news be adhering to that standard? Post reporter Katherine Boyle discusses the matter at some length but never really takes a position; hurray for objective reporting!

We’ve all seen newswomen on TV wearing bright colors, sleeveless tops, low-cut necklines, conspicuous jewelry and, if they aren’t behind a desk, spike heels and short skirts. It’s particularly prevalent on Fox News. Personally, perhaps because I lived through the “dress for success” era, I find such outfits very unprofessional and distracting. As Boyle hints, they seem to be more about sexualizing the women and attracting viewers.

I applaud the bright colors and the addition of attractive dresses to suits and blazers, but in my opinion the styles should remain conservative. Spike heels and open toes are unprofessional and intended to be sexy, as are low-cut necklines. Sleeveless tops are either for sun dresses and hot weather or for evening wear. Jewelry should be flattering but not overly conspicuous. And I’m old-fashioned enough to still think a well-dressed woman should wear hose.

The point, after all, is supposed to be serious news, not sexy women. But then cable news isn’t really serious news anymore, is it?