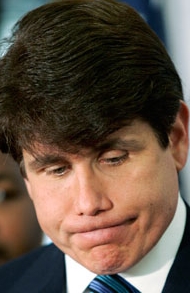 I wish I could believe this marks the end of Blago’s stranglehold on U.S. media, but I suspect it just means another round of appearances, this time to protest his conviction.

In addition, the Illinois Senate voted a “political death sentence,” passing a motion prohibiting Blagojevich from ever again holding elective office in the state.

Looks like the Maytag man is no longer the loneliest man in the world.