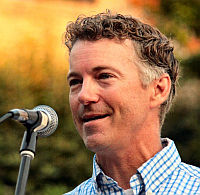 What I don’t like from the president’s administration is this sort of ‘I’ll put my boot heel on the throat of BP.’ I think that sounds really un-American in his criticism of business.

I’ve heard nothing from BP about not paying for the spill. And I think it’s part of this sort of blame game society in the sense that it’s always got to be someone’s fault instead of the fact that sometimes accidents happen.

Is there anyone in the country besides Paul who thinks BP is not responsible for the Gulf oil spill? (Besides BP, of course.) Sure, accidents happen. And when they do, whoever caused them pays for them. You could call the Gulf oil spill an accident, but it was also poor planning, negligence, corruption, mismanagement, short-cutting, risk-taking, and rule-breaking of the worst kind.

As for BP not paying, what does he think all that finger-pointing in Washington was all about? BP and friends couldn’t wait to blame each other for the disaster, precisely because none of them wants to get stuck with the bill. And from Day One, when asked if they’ll pay for their mess, BP officials have spouted only the rehearsed company line: “We’ll pay all legitimate claims.” Which translates to: “We’ll only pay what you can force us to pay in court.”

Who does Paul think should pay for this accident if not BP? If the costs are borne in any way by Washington, or federal relief agencies, or any other public agency, then it’s the taxpayers’ dollars being used — yours and mine. And I guaran-damn-tee you the BP mess was not my fault.