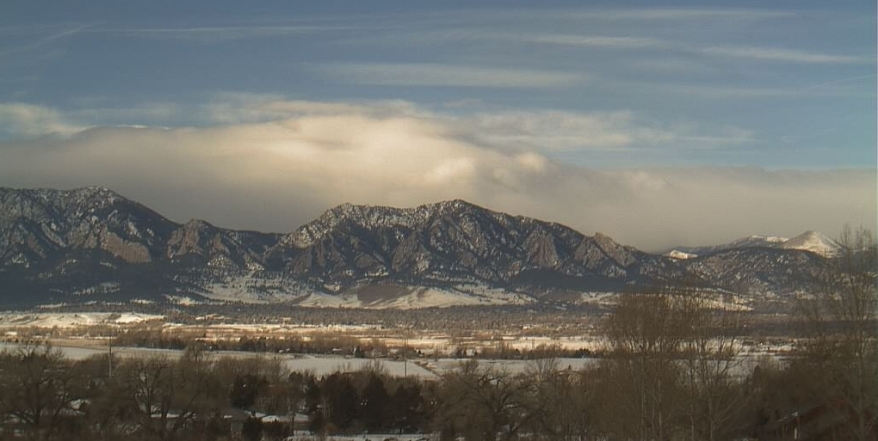 Just another webcam screenshot from yours truly. That’s Boulder sprawled down there in the valley. I’d live there if I could afford it — not around the university where the students and old old hippies are but out in the burbs in the foothills with the miles and miles of greenbelts and parks (and occasional bear, coyote, or mountain lion).

Anyway, again, here, it’s the play of sunlight that got my attention. Love the highlighting on that very solid-looking wall of clouds over the Divide. The high clouds are just streaming along without a care in the world, but that low bank is trying to suffocate the peaks. It may sit there all day and ruminate, or it may come on east onto the plains. Understand the scale here. The peaks along the Divide range from 12,000 to 14,000 feet, and yet those clouds are far and away the most dominant thing on the horizon.

Also notice the strip of sunlight running across the valley floor in the foreground. Chances are a live observer could watch it race across the valley, followed by more shadows and sunlight. Cloud shadows are very noticeable and active at this elevation (5,400 ft.). Pick a comfortable spot with a broad view and settle in for a great light show. I’ve done it many times. Clouds here aren’t something way “up there”; they are right above your head or, in the mountains, often around you. At particularly glorious moments, they will be below you.

On the far right side of the picture you’ll notice that lonely looking little conical white peak. That’s Sugarloaf. It’s conspicuous here because the clouds are hiding the peaks behind it and because it has snow on it. This side of it was burned clear by the Boulder Canyon fire back in the ’80s, so it glows like a beacon when snow-covered. (That was the fire that almost got my brother’s house on the far side of the mountain.)

You know, now that I think about it, a little house right where this camera is, with the same view, would give me a front row seat 24/7 for the greatest show on earth. And probably far fewer mountain lions …