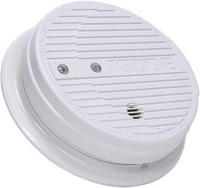 It’s October, and you know what that means. Or you do if you’ve hung around here for a few years.

‘Tis the chirping season, the month when the smoke detectors in my house apparently are required to croak. Said croaking to be preceded by chirps. And said chirps required to begin in the middle of the night. Always.

It happened last night. A bit behind schedule. Previously the agreed upon date was October 19. But still, per the agreement, it was the middle of the night when the chirps began. I crawled out of a sound sleep and a warm bed and grabbed a small stepladder from the next room (had I subconsciously anticipated this?). I yanked the offending device off the bedroom ceiling and removed the battery.

By now you know that, of course, it wasn’t that smoke detector. Two more chirps and I’d ripped down the one in the study. The chirping continued, naturally, so finally I got to the detector in the hall and dismantled it. With all three detectors, sans batteries, lying on the kitchen counter, I went back to bed.

An hour later I was awakened by another chirp and an anxious dog nuzzling my hand. WTF? …

Sure enough, the carbon monoxide detector had decided to join the fun. I pulled it off the wall, wondering if I was being poisoned even as I returned to the bedroom to turn on the light. Something was blinking in the little window on the front. How high was the reading? Would I have to corral the pets, evacuate the house, and call 9-1-1?