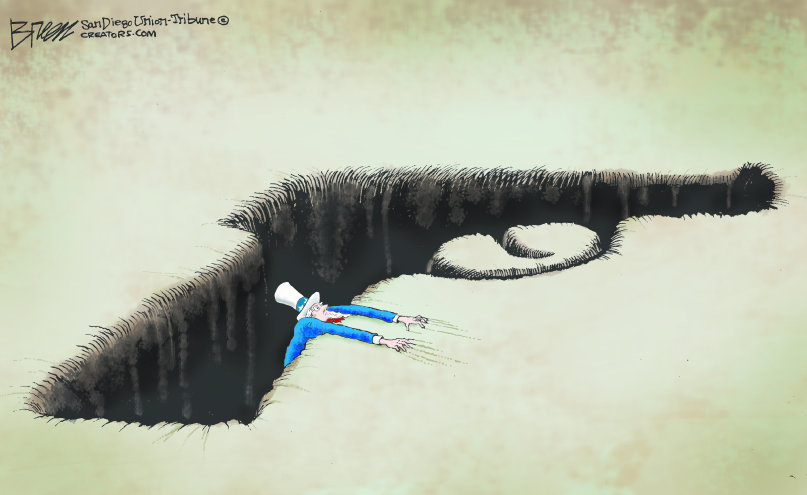 This is a good illustration of how I felt last night. There was news of yet another shooting at a Walmart, this time in Duncan, Oklahoma. (What is it about Walmarts, anyway?) Then there was the backyard shooting in Fresno, California. And following links from the Fresno story, I came across a truly horrifying list of mass shootings in the US so far this year. Local news was again talking about the heroic student who died trying to protect his classmates from a shooter at a Denver school. And Stephen Colbert was interviewing the Prime Minister of New Zealand, who, after just one mass shooting there, passed a law banning all military-style weapons. (Oh, I almost forgot the 10 pm news story about Denver teachers who are training to carry concealed weapons in the classroom.)

All this piled on top of all-too-frequent comments on NextDoor from people reporting shootings in the area, or asking if what they heard was gunshots … while others ridiculed them for not knowing the difference between gunshots, fireworks, and cars backfiring. Really? Are average suburbanites now so familiar with the sound of gunshots that they can distinguish them from fireworks? Only in the last two or three years has it ever occurred to me that the sounds I sometimes hear might be something other than fireworks.

And of course it hasn’t been that long since the shooting just three houses down the street from my house.

Last night, more than ever before, I felt we are slipping into an abyss of gun culture from which there is no escape. The guns are winning.

6 thoughts on “The guns are winning”