Today I came across a bit of background on CISPA, the Cyber Intelligence Sharing and Protection Act, on Congress.org. I really dropped the ball letting something so important get all the way through the U.S. House before I noticed it on my radar — said radar having been focused more on recent legislation threatening women’s rights. Or perhaps, after the SOPA fight, I had just let my guard down.

The first Congress.org item, published March 15, was titled “Who Keeps the Internet Secure?” In other words, who’s in charge? The ACLU, Sen. Joe Lieberman (I-CT), and Rep. Dan Lungren (R-CA) thought it should be the Department of Homeland Security. Sen. John McCain (R-AZ) favored the Defense Department, and a bill from House Intelligence Chairman Mike Rogers (R-MI) didn’t specify any agency. A watchdog group called the Constitution Project rated Rogers’ bill the “scariest,” and it’s the one the House passed last week.

“Will SOPA Aftermath Hurt Cybersecurity Bill?” appeared April 11. Rogers continued to push his bill, addressing the SOPA concerns by stressing how well vetted his bill was:

Rogers repeated during today’s call that his bill, which was approved 17-1 in committee last year, is only 13 pages long and was the result of dozens of meetings with private companies, industry groups, Members and staff.

That’s reassuring, isn’t it? The bill was vetted by the very corporations and industries the bill is supposed to regulate. No mention of anyone looking out for the constitutional rights of average American Internet users like you and me.

Then came some solace on April 25: “Obama Threatens to Veto Cybersecurity Bill.” A statement of administration policy notes:

The Administration is committed to increasing public-private sharing of information about cybersecurity threats as an essential part of comprehensive legislation to protect the Nation’s vital information systems and critical infrastructure. The sharing of information must be conducted in a manner that preserves Americans’ privacy, data confidentiality, and civil liberties and recognizes the civilian nature of cyberspace. Cybersecurity and privacy are not mutually exclusive. Moreover, information sharing, while an essential component of comprehensive legislation, is not alone enough to protect the Nation’s core critical infrastructure from cyber threats. Accordingly, the Administration strongly opposes H.R. 3523, the Cyber Intelligence Sharing and Protection Act, in its current form.

H.R. 3523 fails to provide authorities to ensure that the Nation’s core critical infrastructure is protected while repealing important provisions of electronic surveillance law without instituting corresponding privacy, confidentiality, and civil liberties safeguards. For example, the bill would allow broad sharing of information with governmental entities without establishing requirements for both industry and the Government to minimize and protect personally identifiable information. Moreover, such sharing should be accomplished in a way that permits appropriate sharing within the Government without undue restrictions imposed by private sector companies that share information.

The bill also lacks sufficient limitations on the sharing of personally identifiable information between private entities and does not contain adequate oversight or accountability measures necessary to ensure that the data is used only for appropriate purposes. Citizens have a right to know that corporations will be held legally accountable for failing to safeguard personal information adequately.…

There’s more, and it’s a good read. Makes you feel all warm and fuzzy. But as we now know, the House took a rush vote on Rogers’ bill last Thursday night, April 27, and rammed it through ahead of schedule, 248 to 168. Washington lawmakers don’t do that unless it’s in their best interests, not ours. And I don’t put much faith in Pres. Obama’s threat to veto the bill. After all, that’s what he said before he signed the NDAA into law. 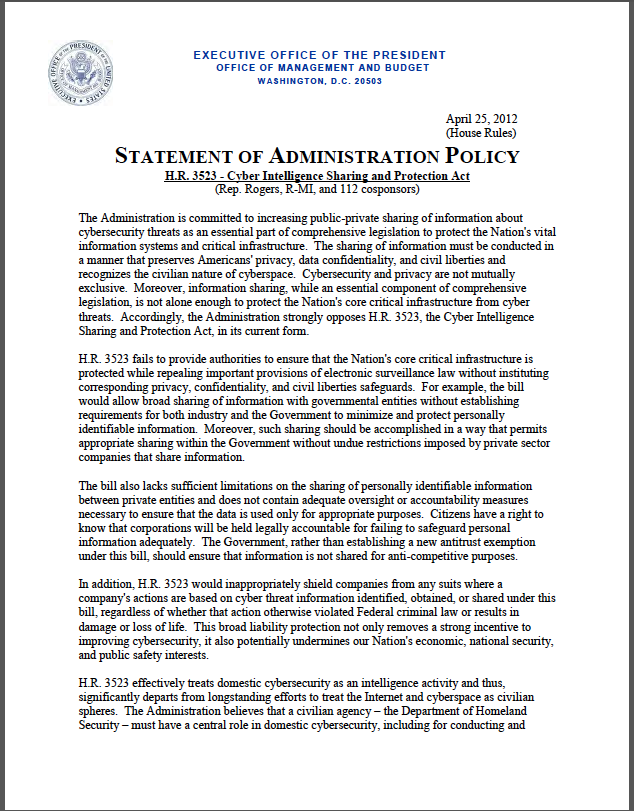 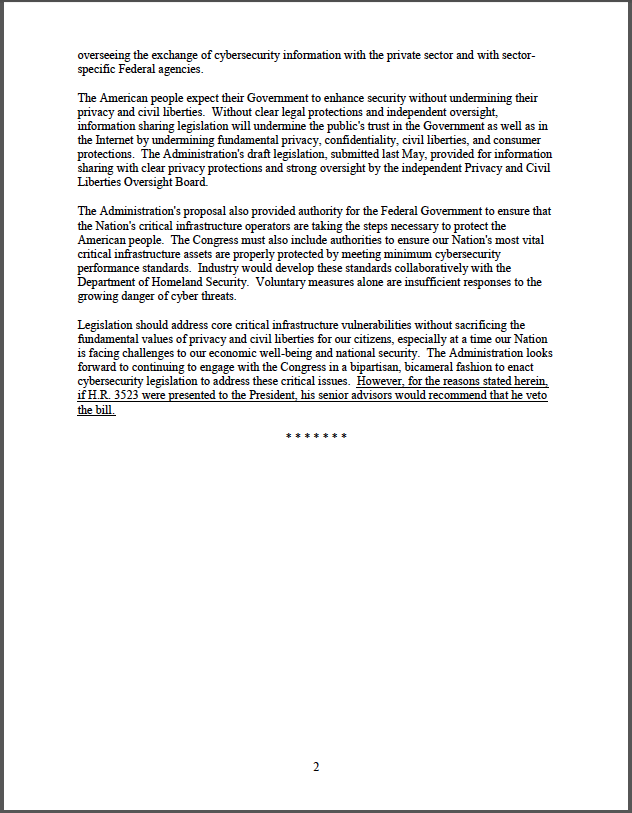